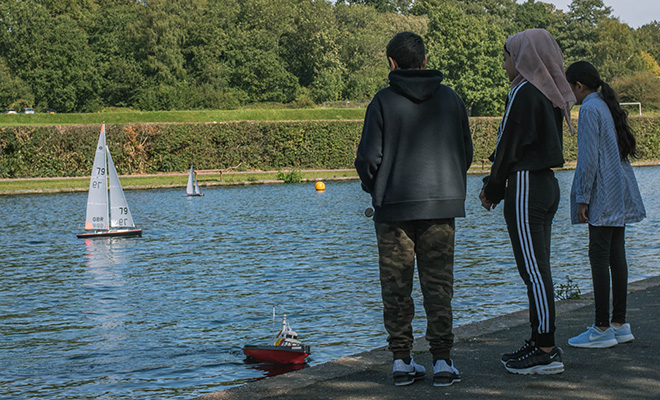 Explore the Tudor manor and medieval hall, saved from demolition by chocolate manufacturer George Cadbury, and rebuilt in the heart of historic Bournville. Enjoy an exhibition by the Birmingham Watercolour Society and get involved in hands on history with dressing up, games and a family trail. Plus, pick up a George Cadbury souvenir to remember your day.

Situated in the centre of Bournville Village Green, the Rest House was paid for by the employees of Cadbury Brothers Ltd to commemorate the Silver Wedding Anniversary of George and Elizabeth Cadbury on 19 June 1913. The design is taken from a medieval butter market in Dunster, Somerset.

An opportunity to hear the Carillon live and to see the Carillonneur in action via a video link at the Rest House, demonstrating the playing technique and performance possibilities. Online booking for guided tours will be released on Friday 12th August 2022.

Built by Richard Cadbury, the Bournville Almshouses, or Quadrangle, contain 33 bungalows sited around around a central communal courtyard. See the shared spaces and magnificent architecture during a guided tour with manager Kathy Knight. Online booking for guided tours will be released on Friday 12th August 2022.

St Francis Church stands at the heart of Bournville Village, designed in the early Christian basilica style and consecrated in 1925. The architect, William Alexander Harvey, created a robust and open space filled with light, which is simple but not plain.

Founded in 1909 by George Cadbury Jr, grandson of Cadbury’s co-founder John, Fircroft College of Adult Education is based in his former family home; a beautiful Edwardian building set in six acres of gardens. Fircroft was originally created to provide educational opportunities for some of the most disadvantaged and excluded members of society.

Rowheath Pavilion was built in 1924 for the Cadbury’s as a sports and social club for the factory workers. At the time it had 14 football pitches, 13 cricket, four hockey and two rugby, 31 tennis courts, two bowling greens, two croquet lawns, an athletics track, clock golf and a boating and fishing lake. In 1937 a modernist lido was added. After the second world war there was a decline in usage leading to the closure of many of the sports facilities and the bulldozers ready to demolish the Italianate building. On Heritage Open Day, we’ll tell the story of how people power saved the building and created a vibrant community hub with an exhibition of the history and a tour of the parkland and playing fields.

Woodbrooke Study Centre is a Quaker college in Selly Oak. The only Quaker Study Centre in Europe, it was founded by George Cadbury in 1903 and occupies his former home on the Bristol Road. Enjoy the beautiful grounds through limited guided tours. Online booking for guided tours will be released on Friday 12th August 2022.

The Serbian Orthodox Church of the Holy Prince Lazar, also known as Lazarica, is a Serbian Orthodox Church located in Cob Lane, and was built for political refugees from Yugoslavia after World War II. Serbs have been associated with Bournville since Dame Elizabeth sponsored thirteen Serbian refugee children during World War I. See the stunning interiors and floor to ceiling frescoes.

Bournville Model Yachting Club was founded in the early 1900s at Rowheath Park. By 1926 George Cadbury had commissioned an area of marshland on the Bournville Village Trust estate to be reclaimed and a concrete pool of even depth was constructed. This is an opportunity to see the Club’s updated boathouse and get close to the model boats. Visitors will see the sailing model boats in action on the water and a number of boats will be available for visitors to sail.

A 2 km Trail takes visitors to ten sites in the beautiful Manor Farm Park that show the changes from farmland in the 16th century to the development of a country estate, finally owned by the Cadbury family, to the creation of a public park in 1955. Use the Manor Farm Park Heritage Trail leaflet for a self-guided visit.

Weoley Hill, is one of the Bournville estate’s original garden villages. Join us for our centenary photographic exhibition at the United Reform Church, enjoy refreshments and wander this arts and crafts village, which is also home to BBC1’s Doctors.

See the central hall with beautiful frescoes and reminisce about school life in this building that has changed little since it was first built.

The War Memorial room contains a collection of company and departmental memorials to Cadbury employees who died in both World Wars. The World War I Memorial features photographs of the 218 men who fell in action or died on active service, beneath a large painting of the Malvern Hills by Margaret Field of the Birmingham School of Art.