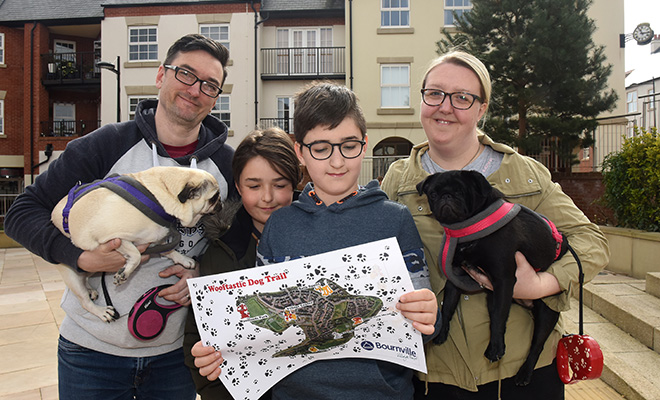 There was no ‘paw-sing’ for dog owners and their four legged friends in Lightmoor Village at the weekend as they took part in an awareness raising dog trail through the Village.

The spring dog trail on Saturday (1st April) was organised by community organisation Bournville Village Trust to help raise awareness of being a responsible dog owner.

It also aimed to showcase the many parks and open spaces dog walkers can use in  Lightmoor Village which is homes to around 1,000 people.

Fleur Hemming, Estates & Stewardship Manager at Bournville Village Trust, said: “There are so many lovely places to walk in Lightmoor Village which are dog friendly including a dog park where, if owners wish, dogs can be let off the lead.

“The dog trail followed our awareness raising campaign which aimed to remind people about the importance of picking up after their dogs to help keep Lightmoor Village clean, green and safe.”

Residents who took part in the trail were each given a map to follow with clues and questions to answer along the way.

At the end of the trail, residents were awarded a doggy bag with a dog ball, treats and vouchers donated by Tails.com and leaflets by the Dogs Trust.

The trail followed a month long social media campaign aimed at encouraging people to pick up after their dogs and use the dog mess bins provided in the Village.

Bournville Village Trust is one of the Midlands’ leading and longest-serving independent community-focused organisations.

Its aim is to create and sustain communities where people can thrive, which it does by providing a range of multi-purpose holistic services.  It works within more than a dozen diverse and distinctive communities in Birmingham and Telford, serving thousands of people.