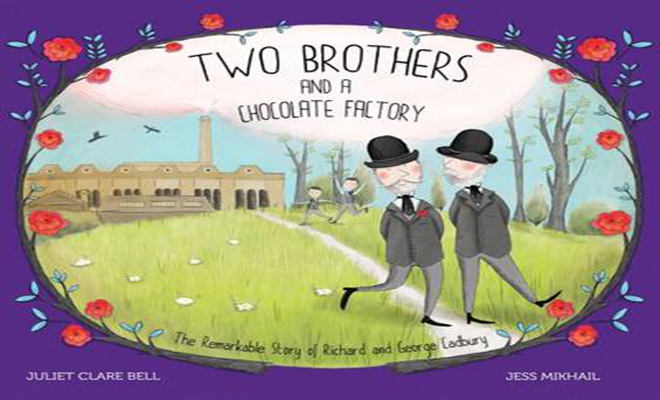 A new children’s book ‘Two Brothers and a Chocolate Factory’ will be launched at Bournville BookFest this Saturday (19th March).

Telling the story of Bournville’s creation by the Cadbury family, the book has been written by local author Juliet Clare Bell and beautifully illustrated by former Bournville Art College pupil Jess Mikhail.

Richard and George Cadbury had a remarkable vision for Bournville.  They didn’t just want to create a successful business out of Cadbury’s chocolate, they also wanted the people of Birmingham, including their workers, to have fresh air, parks, swimming pools, fairer pay, healthcare and education.

Former factory workers and historians contributed their stories to the book and during the week of the book launch they will be passing their stories on to a new generation by visiting local schools.

Every Key Stage Two pupil (7 to 11 year olds), who attends one of the schools on the Bournville estate, will receive a FREE copy of the book and of course, a bar of chocolate.

Juliet Clare Bell and Jess Mikhail will be reading from their book and signing copies at Selly Manor Museum in Maple Road, Bournville, during Bournville BookFest on Saturday 19 March.

The chocolate theme will continue at Bournville BookFest with FREE family events:

‘Two Brothers and a Chocolate Factory’ has been developed as a joint venture between housing association and registered charity Bournville Village Trust, Mondelez International, the Busy Parents Network and the Bournville Society.

The idea for a picture book about Cadburys for pre-schoolers came from Busy Parents Network and BookFest founder Sarah Mullen.

Annette Homer, Director of Housing and Community Services at Bournville Village Trust, said: “We’re so pleased to be working with the Busy Parents Network to launch ‘Two Brothers and a Chocolate Factory’ at the Bournville Bookfest.

“George’s legacy stretches far beyond chocolate. He truly cared about the people of Birmingham and wanted them to live in good-quality homes with plenty of open space – a legacy we continue today.

“It’s fantastic to be able to bring this part of the Cadbury story to life in a fun, entertaining and engaging way for children in the Village and beyond.”

Illustrator Jess Mikhail said:  “Clare [Juliet Clare Bell] and I have enjoyed working together on this book so much. We hope we’ve really captured George and Richard Cadbury and their wonderful vision.”

Tickets for Bournville BookFest 2016 are on sale at bournvillebookfest.com

If you would like to know more, please contact Busy Parents Network at Bournville Community Hub on 0121 472 7989.