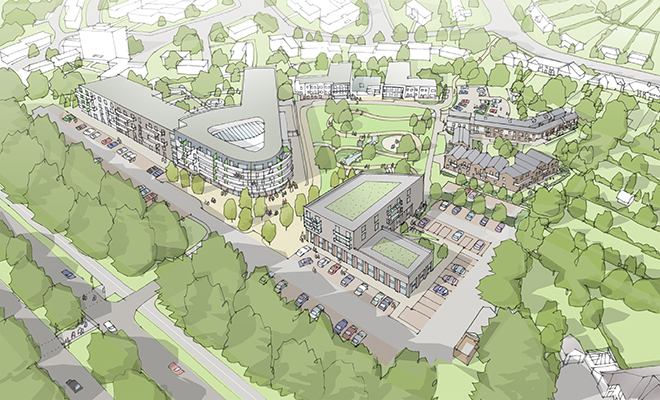 Over 300 older people will be given the key to a new life when they move into Bournville Gardens Retirement Village which opens on 29 October 2015.

The £39m state-of-the-art village is on the site of the former Bournville College in Birmingham and has 18 community facilities including a café, hairdressing and beauty salon, fitness suite, greenhouse, library and IT suite.

Bournville Gardens is the ExtraCare Charitable Trust’s fourth of five retirement villages and is a partnership between Birmingham City Council, Bournville Village Trust and The Homes and Communities Agency.

Bournville Gardens’ 212 homes are affordable with 168 apartments available for shared ownership or purchase; 44 rental apartments will be managed by Bournville Village Trust.  ExtraCare staff will provide care for up to a third of residents within the village.

New residents Maureen and Michael Rickards have lived in their house for 47 years. Michael, now 75, had a stroke when he was 39 and Maureen says it has made them realise that life can be uncertain. They want the security of knowing that the village team will provide care if necessary.

“It’s a new adventure for us,” said 71 year-old Maureen, a former primary school teacher. “It’s a question of looking forward.”

New resident Margery Crampton has been living alone in a three bedroomed house. Her husband died in 2010. She was lonely, and felt unsafe and insecure.

“I was nervous in a house that had three outside doors, especially during the winter months,” said 73 year-old Margery. “I wouldn’t put on my light in the kitchen because I was frightened someone might be in the garden watching me.”

Now she is looking forward to renting an apartment at Bournville Gardens and has already made new friends. She is sleeping better knowing that she will not have to face another winter alone.

“I’m looking forward to everything; the atmosphere, the friendship, the security, the peace of mind. It’s going to be absolutely great,” she said.

For a third of Bournville Gardens residents receiving help with their care, including dementia, the village offers an integrated, holistic approach to housing, care and support.  Care will be linked to varied social opportunities to support a healthier, active and more independent lifestyle.

The value of this approach has been demonstrated by recent independent research by Aston University that shows care costs are slashed by more than a third at the charity’s villages while health benefits for residents soar. Find out more at www.extracare.org.uk/research

Mark Curran, acting chief executive, ExtraCare Charitable Trust, said: “We admire our new residents for the partnership they have shown in forming a vibrant new community at Bournville Gardens.

“The village represents a celebration of independence and opportunity and offers people a shared sense of community. For those wishing to downsize, knowing there is a support if they need it, a comfortable and affordable apartment at Bournville Gardens is an inspired move.

“As a result of demand for apartments at three of our existing Birmingham villages in New Oscott, Newtown and Edgbaston, at least 457 homes have been released back into the community for family housing.”

Bournville Gardens Village is an integral part of Bournville Village Trust’s wider vision for the site on Bristol Road South which is now known at College Green.

Peter Roach, Chief Executive of Bournville Village Trust, said: “George Cadbury didn’t just build the homes in Bournville for the workers of his factory as many believe; he wanted everyone to have the opportunity to live in high-quality housing with the benefits of open space and community facilities.

“Bournville Gardens, which we are very proud to be a part of, continues this legacy by offering homes for a range of different tenures, including affordable rent, and fantastic facilities to help people to keep active and healthy.

“This is the first phase of our ambitious plans for the creation of the wider £60 million care village which we believe will be a national exemplar of how to integrate housing, health and social care.”

Birmingham City Council’s cabinet member for Neighbourhood Management and Homes, Councillor John Cotton, said: “Our partnership with ExtraCare means that 300 older people in Bournville, and 1,500 people across the city, will benefit from affordable, quality housing.

“The state-of-the-art facilities here will help residents to enjoy independence, increased activity and a high quality of life in a welcoming community.  I hope visitors will come to the open day on Saturday 31 October and see for themselves the remarkable facilities on offer here.”

Christine Addison, executive director midlands, Homes and Communities Agency, which has contributed £1.232 million to the project, said: “We’re pleased to have helped make the Bournville Gardens Retirement Village a reality, which is a great example of the HCA’s work to support older people.

“Developments such as this play an important role in making sure that people can remain as independent as they want to for as long as possible.”

Facilities at Bournville Gardens are also open to hundreds of people in the community through the affordable village friends scheme and volunteering.

Visitors are invited to go along to Bournville Gardens Village open day on Saturday October 31 from 10.30am to 4pm. The fun incudes free refreshments and entertainment, and activities for children.