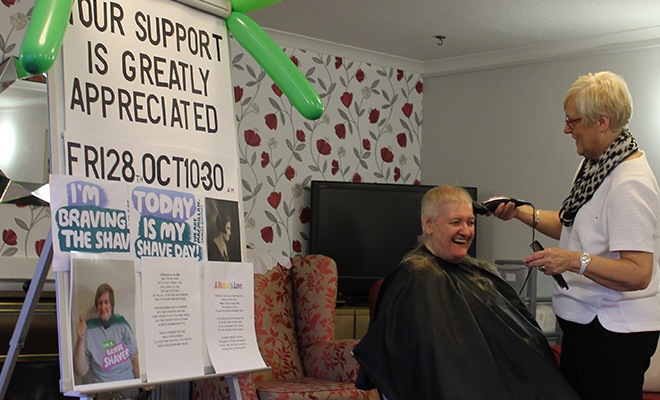 A Bournville pensioner has shaved her hair off to raise money for a cancer charity after losing three of her relatives to the disease.

The plucky pensioner ‘braved the shave’ in front of friends and family at Bournville Village Trust’s Christopher Taylor Court where she has lived for the past six years.

She was inspired to take part in the fundraising feat after losing her father from lung cancer when she was just 16 years old.

Her mother also passed away from bladder and bowel cancer 17 years ago and the grandmother-of-16 also lost a great aunt from breast cancer.

Carol, who is originally from Brierley Hill and has fundraised for many years, said: “Some people have said I’m brave for shaving my hair off, but it’s nothing compared to how brave people who are suffering from cancer are.

“I can’t bring my mom and dad back, but I can do this in their memory.”

Penny McLeod, Manager at Bournville Village Trust’s Christopher Taylor Court, said: “We’ve had cake sales and raffles to raise money for charity, but this is the first time a resident has decided to shave their hair off.

“We cheered Carol on all the way and one resident has even got her a woolly hat to keep her warm.”

The charity event in Bournville coincided with a special party to mark the 30th anniversary of Bournville Village Trust’s Christopher Taylor Court, which provides supported housing to people aged over 55.

Bournville Village Trust is a housing association and registered charity which was founded by chocolate-maker and philanthropist George Cadbury in 1900.

For more information about Christopher Taylor Court, and our other supported housing schemes, click here.