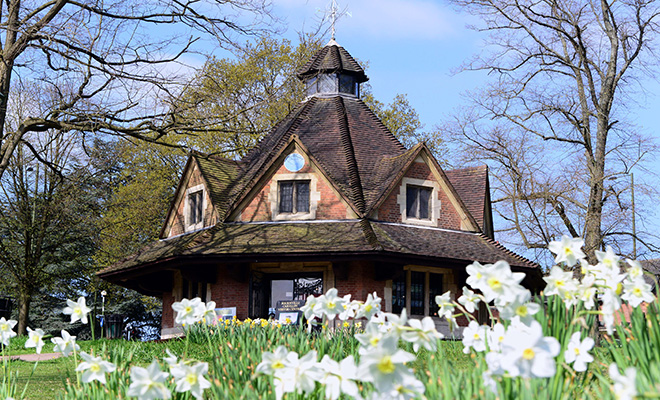 It’s been described as one of the nicest places to live in Britain*, and now Bournville’s iconic Village Green has been declared as one of the best green spaces in the country too.

Often described as the ‘jewel in the crown’ of Bournville, the Green dates back to 1900 and was part of chocolate-maker George Cadbury’s original plans for the model village.

Today, it regularly plays host to some of Bournville’s most popular events, including the Christmas Eve carol service and the Christmas lights switch on.

It is also home to the listed Bournville Rest House which was built in 1914 to celebrate the silver wedding anniversary of George and Elizabeth Cadbury and paid for by Cadbury workers.

Lloyd Gower, Landscapes Manager at Bournville Village Trust, said: “Bournville’s parks and open spaces are what makes the Village so unique and we’re proud to receive this sought-after award for the second year running.

“The award is testament to the commitment of our landscape team who work hard all year round in all conditions to ensure that the Village Green, and other open spaces in Bournville and beyond, look their best.”

“All the flags flying this year are a testament to the efforts of the thousands of men and women, both staff and volunteers, who work tirelessly to maintain the high standards demanded by the Green Flag Award.”

“In 1922 it held a memorial service for George which was attended by thousands of people and today it continues to be an important part of our heritage and a well-used open space.”

A total of 1,582 parks and open spaces in the UK met the standard needed to receive this year’s Green Flag Award or the Green Flag Community Award.

The Green Flag Awards are judged by more than 700 green space experts, who volunteer their time to visit applicant sites and assess them against eight strict criteria, including horticultural standards, cleanliness, sustainability and community involvement.

Bournville Village Trust is a charity and housing organisation which aims to create and sustain flourishing communities where people choose to live and it does this by providing high quality housing and estate management services across Birmingham and Shropshire. In total, BVT provides services to 8,000 homes of mixed tenure and 25,000 people.

*Based on research published by the Joseph Rowntree Foundation.