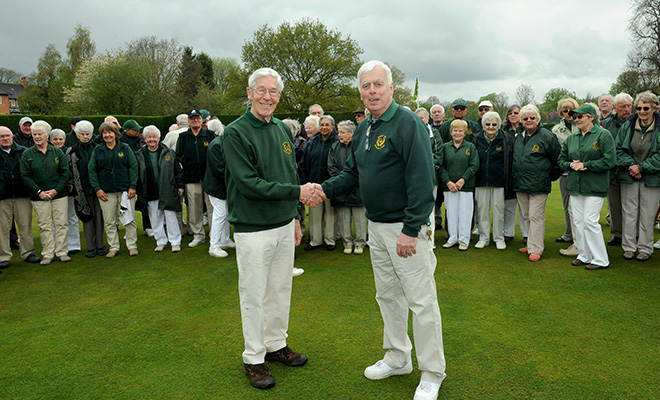 It was opened by George Cadbury Junior in 1928 to promote relaxation and good health amongst residents of his father’s garden village.

Fast forward 90 years and Weoley Hill Bowling Club in Bournville is still going strong, with 90 members ranging from as young as 12 to 90 years old.

To celebrate its landmark anniversary, the Club has opened up its archives to share some of its fantastic and rarely exhibited photographs and documents.

Included in the collection are press cuttings showing George Cadbury Junior bowling the first wood and the Club’s original minute book dating back to 1926.

There are also photos of members marking the end of WW2, during which the Club was forced to dispense with matches as there weren’t enough men to play in them.

Liz Edwards, who has been a member of Weoley Hill Bowling Club for over 30 years, has witnessed its evolution including the full incorporation of women members in 1993.

Liz, who has lived in Bournville for 66 years, said: “Until the early 90’s, women could play as associated members but not be full members of the Club.

“It was a male dominated place when I joined and men would shout ‘men only’ if you passed the green when they were playing. Now there are nearly more women than men.”

Brian Garner, Chairman of the Club, which plays in the Over 60s South West Birmingham League, says its continued success is down to more than just good bowls.

Brian said: “The dedication of the Club’s committee and the support of every member is why we have been going so long.

“Through the winter, when we can’t play, we bring members together through social events. The club is a haven for people on their own, men and women, and there is a great sense of camaraderie.”

Duncan Cadbury, Chair of Bournville Village Trust which has supported the Club throughout its 90 years, said: “For George Cadbury, and indeed his son George Junior, creating Bournville was about much more than building houses.

“There was a deep-seated desire to ensure residents had open spaces to exercise in and took time to participate in pursuits that promoted relaxation and good health.

“I’m so very pleased that Weoley Hill Bowling Club continues to flourish, as it is clear that it provides so much more than sport to its members. I look forward to unveiling a commemorate plaque at their celebratory event this month and bowling the first wood of the afternoon.”

The Club will play a special anniversary bowling match on Saturday 28th April, 90 years to the day that it was opened.