Cadbury clock back on display for Museum’s centenary year 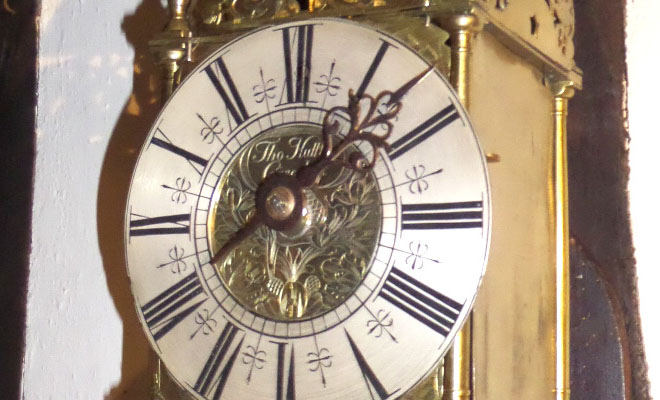 A beautiful 336-year-old clock once owned by chocolate-maker George Cadbury’s son is back on display in Birmingham after being carefully restored.

The Lantern Clock, which dates back to 1680, has been refurbished by Selly Manor Museum, part of Bournville Village Trust, in celebration of its centenary this year.

Made by Thomas Huttly, the clock is constructed purely of brass which had to be imported to Britain at the time as it failed to produce the metal in enough quantities.

Engraved with a dolphin motif, popular amongst clock-makers at the time, the clock was owned by Laurence Cadbury – a successful entrepreneur.

Laurence’s love of antiques is to thank for much of Selly Manor Museum’s collection, which includes over 500 items of furniture and domestic objects donated by the former Director of Cadbury’s.

“This eventually made Lantern Clocks obsolete, causing them to gradually disappear from London homes in the first decades of the eighteenth century.

“We believe that Laurence bought the clock in around 1912 and there are photographs of it in his rooms at Trinity College, Cambridge, before he donated it to the Museum in about 1915.

“We are really pleased that we’ve been able to bring the clock back to its former glory for visitors to see, hear and enjoy.”

Whilst Laurence Cadbury is responsible for much of the Museum’s collection, it was his father George who is credited with saving the historic building.

By the nineteenth century Selly Manor, which dates back to 1474, had fallen into disrepair and faced certain demolition until it was spotted by George Cadbury.

George had it carefully taken down piece by piece and moved to its current site to help educate the people of Birmingham about ‘bygone times’.

Today, the Museum continues to educate visitors with tours, activities and visits focused on how people cooked, dressed and lived 500 years ago.

In celebration of the Museum’s 100th year, Selly Manor is inviting school pupils across the West Midlands to design a magnificent wall-hung medieval banner.

George’s great-grandson Roger Cadbury will judge entries and the winner’s design will be made into a real banner which will go on permanent display at Selly Manor Museum.

For more information about the competition, which closes on 24th April 2016, visit sellymanormuseum.org.uk