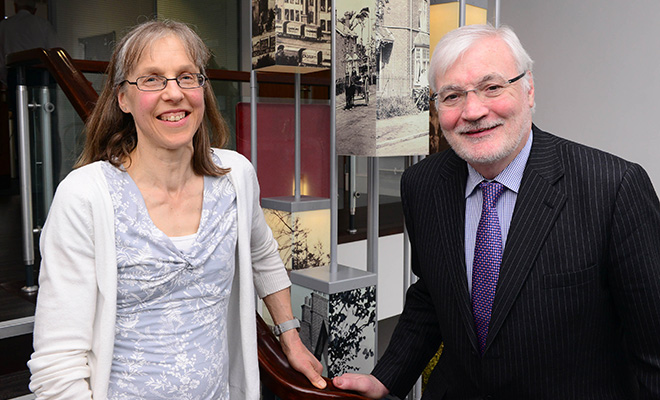 The daughter of Sir Adrian Cadbury, whose landmark report changed the face of corporate governance across the world, has joined the board of a Birmingham housing trust.

Caroline Fowler-Wright, a qualified accountant and former lecturer, has become a trustee at Bournville Village Trust – following in her father’s and grandfather’s footsteps.

Professor John Nolan, Chair of the Construction Industry Council (CIC) and a former President of the Institution of Structural Engineers, has also joined the Trust’s board.

Mr Nolan, a Visiting Professor of Innovation at the University of Birmingham, and non-executive director of the Considerate Constructors Scheme, brings over 40 years’ of experience in the construction industry to the role.

Both will now work with ten other trustees to ensure Bournville Village Trust, which manages 8,000 mixed tenure homes in Birmingham and Telford and was founded by George Cadbury in 1900, is well-managed and governed.

Caroline, who studied engineering at Cambridge University, said: “The legacy left by my forebears, especially my father, is something of which I am extremely proud and greatly influenced by.

“The work that Bournville Village Trust is doing for all the communities it supports is truly special. It’s an honour to be part of the team of people who continue to strive for excellence, providing such high standards of social housing and care of all the estates it manages.”

John, who has founded two successful engineering consultancies including Nolan Associates, said: “It is an honour and a privilege to be invited to join the Board of Bournville Village Trust, which at the same time carries the huge responsibility of helping it to maintain the incredibly high, market leading standards that it has always set itself.”

Peter Roach, Chief Executive of Bournville Village Trust, said: “We are very pleased to welcome both Caroline and John to our board of trustees. Their knowledge, skills and experience will be hugely beneficial to our work, in particular the development of our new homes in Birmingham and Telford, and the ongoing management of the Bournville estate.

“Caroline and John will replace John Dowell and Mary Penny who served as trustees for a combined 36 years, demonstrating an unwavering commitment to the organisation.”

Professor Nolan and Mrs Fowler-Wright’s experience will be vital as Bournville Village Trust continues to develop Lightmoor Village in Telford, which will include 1,000 homes once complete, and its flagship £60 million care village in Bournville.

Being built on the former site of Bournville College on Bristol Road South, the care village will combine over 300 homes with a range of health and social care services, including GP surgeries and a pharmacy.

It’s being delivered in partnership with the ExtraCare Charitable Trust and Avery Healthcare, and will be the first village of its kind in Birmingham.