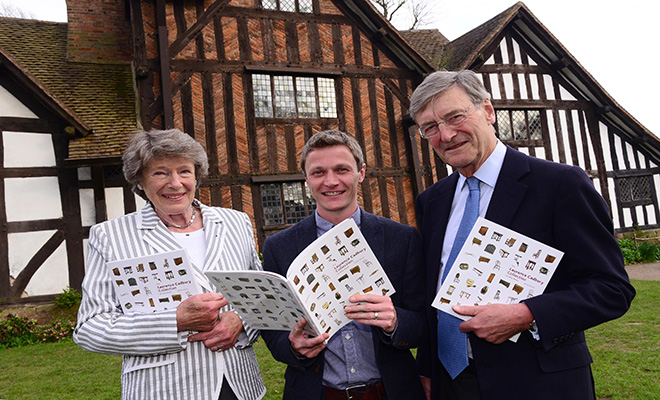 He was the son of one of the most famous chocolate-makers in the world who went on to run a national newspaper and hold a prominent position at the Bank of England.

Now a book has revealed new insights and never before seen images of Laurence Cadbury, the son of philanthropist and founder of Bournville Village Trust (BVT) George Cadbury.

The book, by author and Manager of Selly Manor Museum Daniel Callicott, chronicles Laurence’s extraordinary life, from his travels in the vast wilderness of Alaska and the Yukon to serving in an ambulance unit during WW1.

Laurence’s impressive business achievements are also explored, including his time at Cadbury’s which saw him transform the company to meet the needs of mass manufacturing.

In addition, the book delves into Laurence’s love of antiques, with detailed historical descriptions and photographs of all the objects in the Laurence Cadbury collection which is on show at Selly Manor Museum.

Daniel Callicott, said: “George Cadbury is a much celebrated and respected figure but his son Laurence is probably less well-known despite his vast and varied achievements.

“Not only did he grow sales at Cadbury’s from £14m to £85m, but he also doubled the number of homes in Bournville to 7,000 during his chairmanship of Bournville Village Trust.

“It’s been fascinating for me to explore and write about Laurence’s life and to chronicle the wonderful items of furniture and domestic objects that he kindly donated to Selly Manor.

“Thanks to his love of antiques and generosity, thousands of visitors to Selly Manor each year are able to learn about and explore how people lived hundreds of years ago through this fantastic collection.”

Born in 1899, Laurence studied economics at Trinity College, Cambridge, and was a founding member of the Friends Ambulance Unit during WW1. He was honoured with several awards for his service in the Unit, including a military OBE.

Laurence later went on to serve on the Board of Directors at Cadbury Brothers Ltd for 50 years, as chairman from 1944 to 1959, and to chair Bournville Village Trust – a housing association and charity.

As well as this, he ran national newspaper, the News Chronicle, which sold 1.5 million newspapers a day and was appointed as a Director to the Bank of England.

Laurence’s love of antiques is to thank for much of Selly Manor Museum’s collection, which includes a bed made in 1592 for a Welsh archdeacon and a chest from the 1580s carved with dragons and strange creatures.

All proceeds from the sale of the book, The Laurence Cadbury Collection at Selly Manor, will go towards the conservation of the collection.

The book is priced at £15 and is available to purchase by calling the Museum on 0121 472 0199, emailing sellymanor@bvt.org.uk or visiting the gift shop.

Selly Manor Museum, in the heart of Bournville village, is home to Selly Manor and Minworth Greaves, offering visitors the chance to step back in time to explore how people lived over 500 years ago.