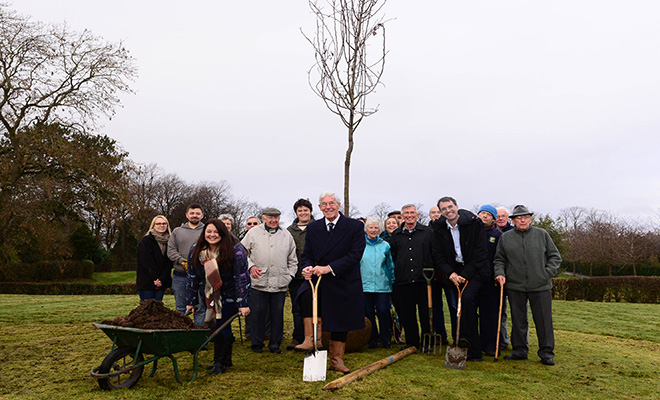 He was the famous Birmingham philanthropist who planted a fruit tree in every garden in Bournville to boost the health of residents in his model village.

Now 100 years on, Bournville residents are taking George Cadbury’s tradition one step further by turning a plot of disused land into an orchard for the whole community.

The half-acre grove is to be created by housing association and charity Bournville Village Trust, in partnership with residents, on unused land at Rowheath Pavilion.

Eight different varieties of apples, pears, damson and plum trees will be planted there and the orchard, a first for the village, will be open to all residents.

People will be encouraged to harvest the orchard’s fruits together at ‘community pick days’ and there are also plans for pie-making competitions.

The orchard will be opened by Cadbury family-descendant and chair of Bournville Village Trust Duncan Cadbury, Conservative Councillor for Bournville Timothy Huxtable, and residents on Wednesday 25th November.

“Our founder George Cadbury truly believed in the benefits of gardening and growing your own and it’s fantastic to be able to carry on this tradition today.

“Residents have been actively involved in picking the fruit trees and we’re looking forward to planting them and seeing the orchard develop.”

Janet Anastasio, who grew up in Bournville, is one of the residents involved in the community orchard along with her husband Gennaro.

The couple worked at Cadbury for 30 years and are keen gardeners and allotment holders, along with their daughters and grandchildren.

Janet, said: “I love gardening and to create an orchard from what was an empty space is amazing, it will bring the community together.

“We’re hoping to make pies and crumbles with the fruit produced and sell them to raise money to put back into the orchard.

“I think George Cadbury would think it was inspiring. It’s nice to think that his ethos and values are still continuing in the community today.”

Bournville, which is credited as laying the foundation for the development of garden cities, was created in 1895 by George Cadbury and his brother Richard.

Gardens were considered just as important as the housing in the village, with the average size of gardens stretching to 600 square yards in the early years.

Residents were encouraged to grow their own vegetables, and lectures, gardening classes and competitions were run to highlight the benefits of gardening.

By 1913, there were thought to be 1,100 gardens in Bournville and it was calculated the average value of the fruit and vegetables produced was 2 shillings, 6 pence each week.

Today, Bournville Village Trust, which manages the village, continues to encourage gardening through a recognition scheme, allotments, and a new ‘green’ forum that residents can join

The Trust is a registered charity and housing association which provides services to 8,000 homes of mixed tenure and 25,000 people in Birmingham and Telford.