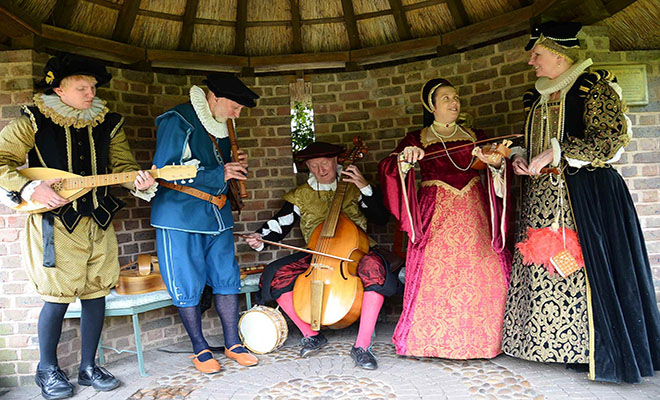 One of Birmingham’s oldest buildings will be lit up by candlelight next weekend as it brings the Tudor period to life with an evening of traditional music and dance.

Selly Manor Museum, managed by Bournville Village Trust, will be decorated with Christmas greenery and 200 candles on Saturday, 6 December, to create an accurate feel of winter festivities 400 years ago.

There will be traditional Tudor music played on authentic instruments of the period, and dancers from Gloriana Living History will be in the impressive court dress of the age.

Local choirs will also be performing traditional Christmas carols and the Blackwell Concert Band will play seasonal favourites, all washed down with mulled wine and mince pies.

Daniel Callicott, Museum Manager at Bournville Village Trust, said: “Christmas was the most popular festival of the Tudor period and the Tudors would often indulge in Souse – pickled pigs feet and ears – and Tudor Christmas Pie which contained pigeon, partridge, chicken, goose and turkey.

“Although we won’t be serving up these dishes, we hope that the traditional decorations, music, dance and costumes will provide a fascinating insight into the kind of Christmas enjoyed 400 years ago and bring the history of Selly Manor Museum to life.”

The traditional Tudor Christmas event will take place from 5pm to 8pm and costs £5 for adults, £4 for concessions, £3 for children and £16 for a family ticket (up to two adults and three children).

Tickets can be booked in advance or bought on the day and refreshments are included. To book, call Selly Manor Museum on 0121 472 0199 or email sellymanor@bvt.org.uk

Believed to date back to the 14th century, Selly Manor was saved from demolition by the chocolate manufacturer George Cadbury almost a hundred years ago. Originally a mile from its present site, it was dismantled then moved to the heart of Bournville and opened as a museum in 1917.

The museum offers visitors the chance to delve into Tudor history and it houses the Laurence Cadbury collection of furniture.

Bournville Village Trust is a housing association and charity which manages 8,000 homes and provides services to around 25,000 people across Birmingham and Shropshire.