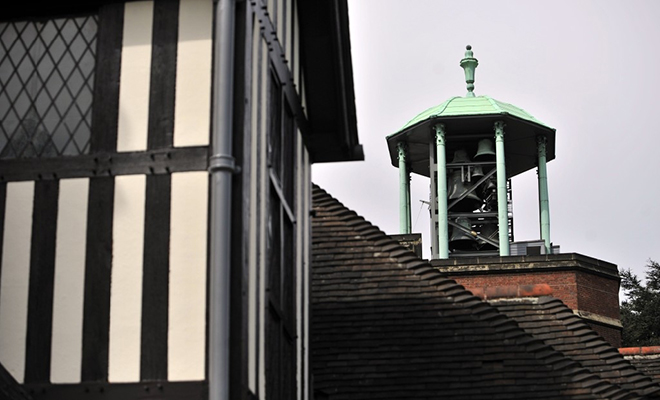 A set of famous Birmingham bells will ring out on Christmas Eve as part of a worldwide concert being held in memory of the World War 1 Christmas truce between German and Allied troops.

The carol was sung jointly in three different languages by German and Allied soldiers during the break in fighting on Christmas Eve in 1914.

Beginning on 24 December in Belgium, the centennial commemoration will start with a performance on the Peace Carillon in Messines – the city which was at the heart of the truce.

So far, Carillonneurs from all over the world are expected to participate in the event which will mark the centenary of the ceasefire, which continued through to Christmas Day.

The performance from Bournville’s Carillon, which is made up of 48 bells, will coincide with the annual ‘Carols on the Green’ service, organised by local churches in conjunction with Bournville Village Council.

Trevor Workman, Carillonneur to Bournville Village Trust, said: “The Christmas Truce of 1914 was an amazing event in history and has been said by historians to have been ‘the most extraordinary celebration of Christmas since the birth of Christ in Bethlehem 2014 years ago.’

“It is a great privilege to be able to participate in this worldwide commemoration as a tribute to those who lost their lives in World War 1.

“It is most fitting that the occasion of our annual ‘Carols on the Green’ should be the platform for this tribute as the vast international crowd will also be able to identify with the commemoration.”

The Bournville Carillon will aim to perform ‘Silent Night’ as close to 6.15pm as possible to coincide with the actual timing of the Christmas truce in 1914.

The Christmas truce was a series of unofficial ceasefires along the Western Front which saw German and British soldiers cross trenches to exchange seasonal greetings.

Troops from both sides entered no man’s land on Christmas Eve and Christmas Day to share food and drink, show one another photographs of their families and play football.

Erected in 1906 by chocolate maker and philanthropist George Cadbury, the Bournville Carillon is considered one of the finest and largest instruments of its kind in Great Britain.

Positioned above the tower of Bournville Junior and Infant School, the Bournville Carillon is owned and administered by Bournville Village Trust.