Contest launches to design a banner for the Manor 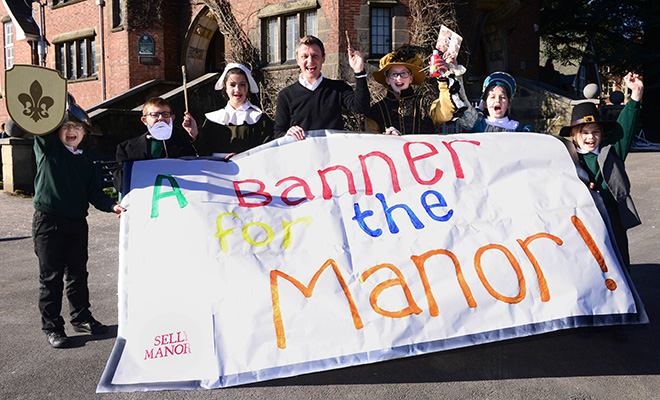 It was the Tudor house destined for demolition until famous chocolate-maker George Cadbury stepped in to save it for the people of Birmingham.

Now 100 years since it was rescued and turned into a Museum, Selly Manor in Bournville is asking pupils across the West Midlands to create a unique homage to its history.

The Museum is inviting children to design a magnificent wall-hung medieval banner – similar to those favoured by knights and royalty – to celebrate its centenary.

George Cadbury’s great-grandson Roger Cadbury will judge entries and the winner’s design will be made into a real banner by an expert in historical design.

It will be unveiled at the launch of the Museum’s centenary exhibition in August and will then go on permanent display for thousands of visitors to enjoy each year.

Daniel Callicott, Museum Manager at Selly Manor, said: “Whilst George Cadbury is synonymous with chocolate, few people know the special role he played in saving one of Birmingham’s oldest buildings.

“George spotted its potential, which is reflected in a letter to his son Laurence where he wrote, ‘these old buildings are educational and especially needed for a new town like Birmingham; a vast majority of people never think of bygone times.’

“Creating our very own medieval banner is a fantastic opportunity for children to be inspired by Selly Manor’s special story, get creative and have the chance for their work to be made and then seen by thousands of people.”

Claire Williams, Head teacher at Bournville Junior School, said: “We are really excited to be launching and taking part in the competition to design a medieval banner for Selly Manor Museum.

“The idea that thousands of visitors could see their work is very appealing to our children and it is also an engaging, creative and fun way to learn about local history.”

Dating back to 1474, Selly Manor was originally thought to be the manor house for Selly until recent research revealed it was in fact a prosperous house that was home to a host of colourful characters.

The competition is open to children aged 11 and under at schools in the West Midlands and closes on 24th April 2016.

As well as having their banner design made and displayed at the Museum, the winner will also receive a £25 book token, free family annual pass and a free visit to the Museum for their class.

There will also be runner up prizes in three age categories (5 and under, 6-8 and 9-11) of a £10 book token and a free family ticket to the Museum.

Prizes will be given out at the launch of the Museum’s centenary exhibition on Tuesday 2nd August.