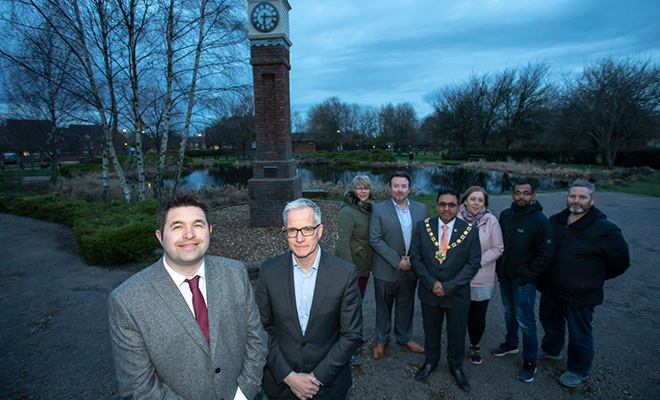 Telford & Wrekin Council has set aside a half a million pound fund ring fenced for Lawley and Lightmoor.

The fund is to be invested into the two areas that are Telford’s largest new housing developments to ensure they continue to flourish.

The money which will pump prime initiatives across Lawley and Lightmoor will also be used as leverage in funding from other partners with the creation of a community-led and community backed action plan.

Bournville Village Trust (BVT), who currently run the Stewardship Services and will play a key part in the new community-led “task force”, has pledged to freeze its Stewardship Charge for the next two years while the organisations work together.

The fund can also be used to help set up and prime a range of resident-led initiatives to promote further community involvement and activities improving the areas.

The grant is part of a series of one-off investments by the Council totalling £3.6m.

The Lawley Village Community Association will lead an independent survey of residents in Lawley to get their views and the Council will also employ a dedicated person to help support the community and BVT on a range of initiatives.

In Lightmoor, which when complete will feature 1,000 homes in a garden village setting, a new residents’ forum will be set up to revisit the village’s vision and provide community-led leadership. The Council is also due to make some safety improvements Lightmoor’s primary school.

The Council’s £500,000 funding, which is in direct response to issues raised by residents in Lawley and Lightmoor, will be overseen by a dedicated Cabinet Member and the creation of a Task Force . The Council Leader Councillor Shaun Davies will act as that Cabinet Member in the interim.

The council will work closely with Bournville Village Trust which has developed Lightmoor Village in a joint venture with Homes England and includes local management through a stewardship service.

Council leader Shaun Davies said: “These are two of the borough’s newest and fastest growing communities. They face a unique set of challenges linked to their growth and it’s important that partners come together to help tackle these and work with residents to do all we can to build strong communities.

“We are making this extra funding available to help establish ways to address a number of issues that affect these areas and to work even more closely with residents to help them become part of a longer term solution.

“In my role as Cabinet Member for Lawley and Lightmoor, I will hold developers and partners to account on behalf of and in conjunction with residents and residents groups. It is clear that Lightmoor and Lawley are fantastic communities!”

Borough mayor and local ward member Councillor Raj Mehta, who has chaired a number of meetings between partners and stakeholders, said: “Lightmoor and Lawley are amazing and exciting places to live, but like many places with new homes there’s a few teething and snagging issues.

“This new funding and new Leadership will help ensure that we can get these resolved and allow these communities to become even better.”

Pete Richmond, Chief Executive of Bournville Village Trust, said: “Lawley and Lightmoor are two of Telford’s most significant and largest housing developments of the last decade, each with their own communities and distinct identities.

“With both developments, there is much to be proud of. However, now is the time for partners and residents to take stock and resolve any issues to ensure they continue to flourish.

“We look forward to working with Telford & Wrekin Council and continuing to work with the Lawley Village Community Association and residents in Lightmoor.”

Jim Weir, of the Lawley Village Community Association, said: “Lawley Village is a great place to live and the association has been working hard to find solutions to the challenges residents have faced as the development grows.

“We particularly welcome the commitment to partnership working by Telford & Wrekin Council to work with the community.  We are engaged in a community wide consultation to reshape the stewardship service and to refresh our vision for Lawley and this significant investment by Telford and Wrekin Council is an important boost to these efforts.”