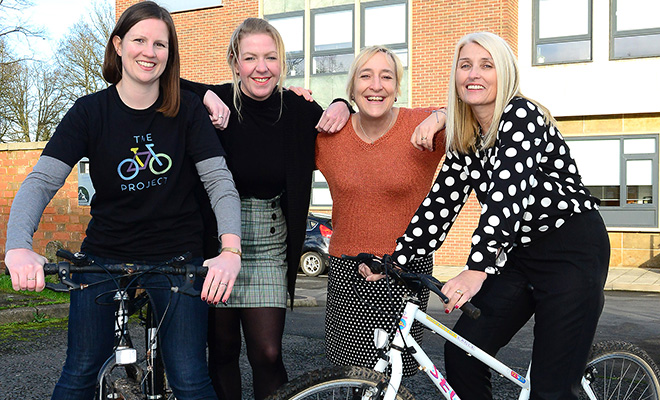 Cyclists in Birmingham are being urged to have a post-festive clean-out and donate their unwanted bikes to refugees and asylum-seekers in the city.

Second-hand bikes can now be dropped-off at Bournville Village Trust’s office at 350 Bournville Lane after the Trust partnered with charity The Bike Project.

The Bike Project, which opened its Birmingham branch last year, give the bikes to refugees and asylum seekers who struggle to afford other forms of transport.

Having a bike can help an asylum-seeker get to crucial appointments and save them nearly £20 a week (cost of a bus pass) of their £37.75 weekly income.

A proportion of the donated bikes are also sold, with 100% of the profits going back into the work of the charity which also teaches refugee women to cycle from scratch.

Jessica Allan, Community Development Manager at Bournville Village Trust, said: “We are really pleased to support The Bike Project by helping to provide more drop-off points across Birmingham, making it easier for people to donate their used bikes.

“Now, just after Christmas, is the perfect time to have a clear out and put second-hand bikes to good use by donating them to The Bike Project. In turn, you can help make the lives of the many refugees and asylum seekers who have sought sanctuary in our city a little easier.”

Sarah Goss, West Midlands Operations Manager at The Bike Project, said: “The Bike Project are so pleased to have the support of Bournville Village Trust by collecting bikes for us.

“We rely on the support of community organisations like BVT and the many generous local people who donate their bikes to us, to enable us to get refugees cycling.

“A bike may seem like a simple thing, but if you have to choose between a hot meal and catching the bus, the increased mobility that a bike brings can be life changing.”

Unwanted bikes can be dropped off at Bournville Village Trust’s office, 350 Bournville Lane, B30 1QY, between 10am and 12pm and 2pm and 4pm every Tuesday, Wednesday and Thursday. Please call the BVT Customer Services team on 0300 333 6540 or email communityadmin@bvt.org.uk to confirm a drop-off time.

All bikes, of various conditions and sizes, are accepted as long as frames are not cracked, dented or snapped in two.

Around 32,500 asylum-seekers sought sanctuary in the UK last year, with 12% of these in the West Midlands area.  Since opening in London in March 2013, The Bike Project has donated over 5,000 bikes and opened its Birmingham branch in June last year.

Bournville Village Trust is a housing association and registered charity whose mission is to create and sustain communities where people can thrive. It provides services to 8,000 homes and 25,000 people in Birmingham and Telford.