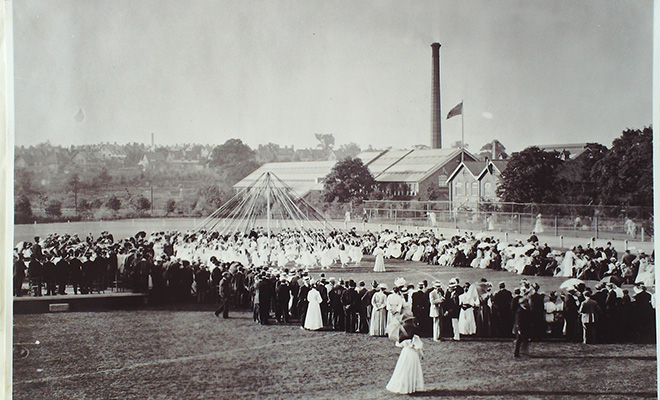 A Birmingham festival dating back 120 years which attracts thousands of visitors is making its comeback after Covid forced its cancellation for two years in a row.

Set up in 1902, The Bournville Festival, held on the recreation ground in front of the Cadbury factory, was originally organised to celebrate the Coronation of King Edward VII.

However, it was such a hit that chocolate-maker and founder of Bournville, George Cadbury, made it an annual event with a maypole as its centrepiece.

The only time apart from during the Covid pandemic that the community event has been cancelled was during the First and Second World Wars.

Now the team of volunteers who give up their time to organise the event are planning to make the 2022 Festival, organised by Bournville Village Council, on Saturday 25th June bigger and better than ever.

There will be a range of great performers, acts and entertainment, and in a bid support small businesses and sole traders after Covid, they’ll be offered priority on stalls.

The maypole will also remain a centrepiece of the event with youngsters, aged between 11 and 18, rehearsing for it since Christmas and there will be a fantastic musical firework finale.

Del Wilford is one of the volunteers who gives her time to put on the Festival. She has lived in Bournville on and off since 1947 and took part in the Festival’s Maypole from aged five to 16 years old.

The 80-year-old, who is also Chair of Bournville Village Council, said: “I’m thrilled to bits for the village that we’re able to put the Festival on again.

“George Cadbury wanted us to have a day of fun and I think with everything that has, and is happening, in the world at the moment the Bournville Festival can bring us some joy.”

Don Julian, who has volunteered with the Festival team for 25 years, said: “I’m looking forward to having it back, bigger and better than ever. It’s a great family day out.”

Del and Don are both members of Bournville Village Council, a non-political residents association formed of a group of volunteers.

The Council represents residents in Bournville and works with community organisation Bournville Village Trust and others to help make Bournville a better place for all.

They also organise other events around Bournville – including Jazz on the Green and the turning on of the Christmas tree lights in December as part of the Bournville Christmas Festival.

For more information about the Festival, go to https://bournvillevillagecouncil.org.uk/bournville-village-festival/  or https://www.facebook.com/BournvilleVillageFestival

Tickets are available to buy from the following shops / premises in advance Evans’ of Bournville, Hoot Hair and Shenley Green and Green Meadow convenience store. Tickets cost £3 in advance or £4 on the day, accompanied children under 10 go free.