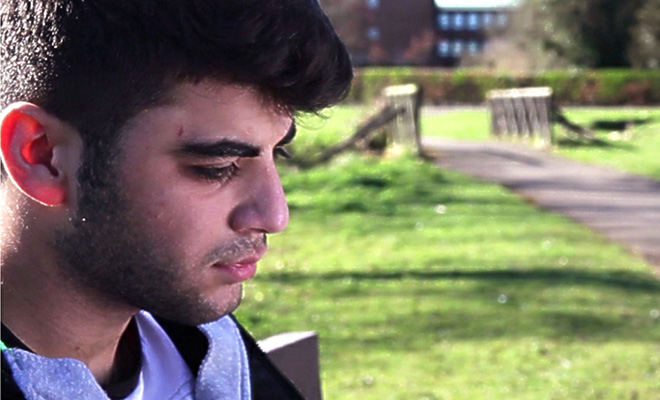 A short film written by and starring care leavers will be screened in Birmingham this week in a bid to raise awareness of the challenges they face.

There are 9,240 looked after children in the West Midlands* and according to Barnardo’s, care leavers are more likely to face challenges such as finding work and a home.*

Called ‘Hidden Faces’, the film explores some of these difficulties, including isolation, low self-esteem and self-harm, through a range of fictional characters and scenarios.

It also breaks some of the hurtful stereotypes surrounding care leavers, like presumptions that they won’t be successful or achieve academically.

The young people who star in the film have received support from housing charity Bournville Village Trust, which worked with Rage Arts to produce the film.

Khateeja Bibi is one of the stars of the film. She spent time in foster care and in supported housing with the Trust before living independently.

She plays a budding vlogger who initially hides the fact she has been in care from a university friend before being inspired to share her story.

Khateeja, said: “I wanted to take part in the film to show that children who are in, or have been in care, are just like normal children and shouldn’t be looked down on.

“We may need a little more support than other children our age, but we are more than a statistic. I juggled two jobs whilst completing my GCSE’s and I think it’s really important to show people that we are not failures and we can achieve things.”

Bournville Village Trust hope the film will raise awareness of the issues care leavers face and tackle some of the myths associated with being in care.

Alison Wilkinson, from Bournville Village Trust, said: “There are many harmful stereotypes about care leavers. From the presumption they have problems with drugs to hurtful accusations that they’re some way responsible for being in care.

“The truth is there are many reasons young people enter care but with the right support many go onto live successful and happy lives.

“We wanted to produce this film to tackle some of these myths and give young people the opportunity to learn skills like public speaking that will be useful whatever career choice they pursue in the future.”

Owen Radmore from Rage Arts, said: “The film not only shows some of the issues facing the young people, but what they are capable of achieving if they are given the chance.”

The film will be previewed on Friday 16th June to a select audience and Bournville Village Trust will also share the film on its YouTube channel following the screening.

The film was funded by a grant from Deutsche Bank through Heart of England Community Foundation and was produced by Rage Arts working with Bournville Village Trust.

Bournville Village Trust has been providing support services to care leavers for 15 years.

As well as providing fully-furnished flats, it supports care leavers aged 16-18 to gain educational and vocational skills and accreditations.

They also prepare young people for living on their own by helping them to develop practical skills, such as budgeting and cooking.

*“Children looked after in England including adoption: 2015 to 2016” – National Statistics