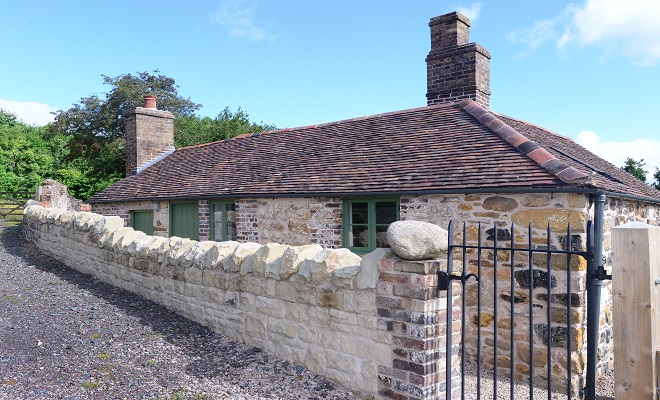 A rare and dilapidated 18th century cottage in Telford has been brought back to life following a restoration project.

Known as Squatters Cottage, the previously empty building in Lightmoor has been carefully restored by Bournville Village Trust, with many of its original features preserved.

A pretty quarry tiled floor has been brought back to life, original wall furnishings have been kept to show how the cottage was once decorated and timber doors have also been refurbished and re-used.

Constructed mainly of local sandstone and Broseley brick under a clay tile roof, the cottage is a rare surviving example of a late 18th century workers squat.

It will now be used as a space for the community to enjoy, with suggestions for art therapy classes and nature activities in the offering for the Grade II listed building.

Tracey Rowe, Head of Estates and Stewardship at Bournville Village Trust, said: “Despite the cottage being in such a dilapidated state, we believed that with careful renovation it could be brought back to life for the community to enjoy.

“The restoration, funded by The Veolia Environmental Trust through The Landfill Communities Fund and Homes England, has made the most of the building’s original features, using traditional materials and crafts, but also has all the modern elements you would expect like a new bathroom and kitchen.

“We are looking forward to working with the community and local organisations and partners, like Shropshire Wildlife Trust, to use it for a variety of different activities and ventures.”

Lizzie Cooke, from The Veolia Environmental Trust, said: “We’re proud to be able to support this project with a £115k Landfill Communities Fund grant. The cottage now has a new life, and offers a unique community space for all to enjoy.”

Colin Preston, from Shropshire Wildlife Trust, said:  “The cottage is a perfect complement to our neighbouring nature reserve, which is enjoyed by the whole Lightmoor community.  It provides a facility for running courses, supporting volunteers and for environmental education with Lightmoor Primary School.”

Built in 1794, Squatters Cottage was originally a single room with later extensions adding a kitchen and bathroom. In the 1920’s it was known as 8 The Stocking and became vacant in 1963. Neighbouring cottages were demolished in the late 1970’s, leaving the building as a rare example of such a property. It was surveyed by the Ironbridge Gorge Museum in 1985 and listed in 1992.

Lightmoor Village is a major housing development which will create up to 1,000 homes once housebuilding is complete.

It is being developed through a joint venture between Bournville Village Trust and Homes England and currently features over 800 homes, a primary school, nursery, retail units and medical centre.

Once complete, more than half of the area of the Village will be used for parks and other open spaces.

Bournville Village Trust is a housing association and registered charity whose mission is to create and sustain communities where people can thrive. It provides services to 8,000 homes and 25,000 people in Birmingham and Shropshire.