From barracks to Bournville: Family find happiness in new home 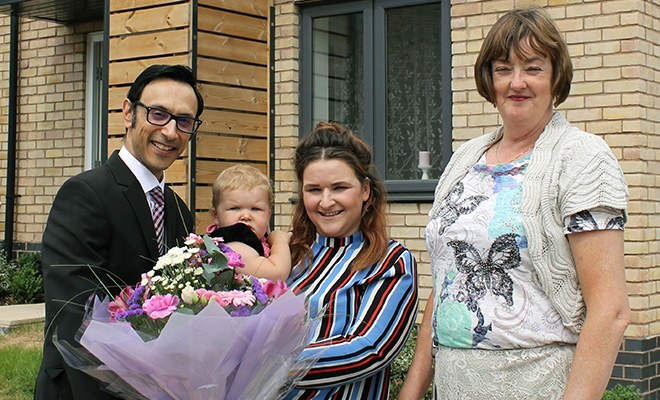 A mother who feared she would end up homeless after having to leave army accommodation has become one of the first to move into new affordable housing in Bournville.

Laura Thompson was told she had around 90 days to find a new home after a marriage breakdown meant that she was no longer entitled to live in army barracks near Bristol.

With the help of an armed forces charity and housing association Bournville Village Trust, the 28-year-old and her daughter Holly are now settled in an affordable home at the Bournville Park development, off Bristol Road South.

Featuring 138-homes, Bournville Park will include five homes for social rent and 15 apartments for shared ownership all managed by Bournville Village Trust.

The site, once home to Northfield Manor House the residence of the Trust’s founder George and his wife Elizabeth, is being built by Crest Nicholson.

Laura, who worked as an engineer consultant before moving back to Bournville, said: “When we were told we had to leave I was really worried about where we would end up. Luckily, the army and SSAFA [an armed forces charity] were fantastic and really supported me.

“I grew up in Bournville, my nan and grandad built a home here and they now live just up the road. My mom lives here too. It’s great to be able to bring my daughter up doing the same things that I did as a child, like play in Manor Park.

“I love my new house too, it’s amazing and everyone is friendly. I feel very lucky and welcomed into the community by Bournville Village Trust.”

Hitesh Champaneri, Development Manager at Bournville Village Trust, said: “We are really pleased that Laura and her daughter are happy in their new home.

“Having a range of homes in Bournville, including housing for social rent, shared ownership and sale, is an important part of our mixed community ethos and we are proud to be working with Crest Nicholson to achieve this.”

Bournville Park was launched last year to huge demand and the first homes were completed in October last year.

The shared ownership homes, which will include 11 two-bedroom and four one-bedroom apartments, are expected to be finished by autumn this year. There are also plans to rebuild Northfield Manor House, which was demolished after being severely damaged in an arson attack four years ago.

It is hoped the new homes will go some way to helping meet the demand for housing in the West Midlands, which according to the National Housing Federation has a shortfall of over 40,000 homes.*

In Birmingham alone, the deficit of homes needed to meet demand stands at almost 19,000.

Bournville Village Trust is a housing association and charity founded by chocolate maker and philanthropist George Cadbury in 1900.