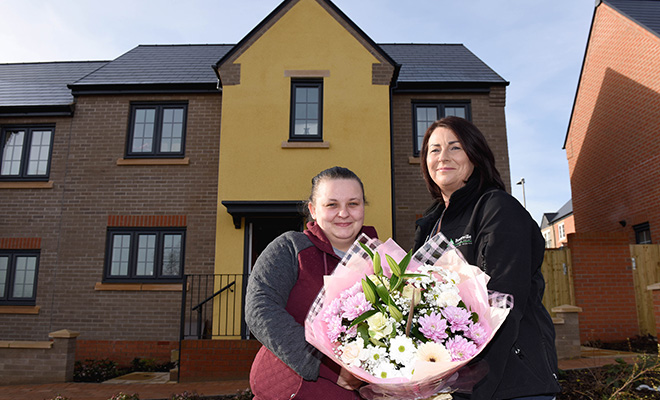 A mother-of-two who was made homeless after being forced to give up her job has become one of the first to move into a new 200-home development in Telford.

Tina Hemmings was forced to give up work in a pub, and the flat that came with it, last year after having her second child.

The 26-year-old, her partner Daniel and two children, moved into temporary accommodation while they looked for a new home, but were faced with a raft of problems.

Now Tina and her family are facing a much brighter future after moving into one of the first homes to be completed on the Paddocks development in Lightmoor.

It is being built by housing association Bournville Village Trust in partnership with Homes England (formerly the Homes and Communities Agency) and will create 200 new homes.

Fifty of the properties will be for social rent, managed by Bournville Village Trust, helping to create much-needed high-quality and affordable housing in the area.

Tina said: “While we were grateful not to be homeless, the flat we were put in was tiny. It was difficult to get out on my own when Daniel was at work as I struggled to get the pram up and down the stairs.

“The people who lived there before hadn’t looked after it and we had a problem with rats for the first two weeks. It took us three days to clean it. In the end I was put on medication for depression, I felt trapped.

“Now I feel a lot better. I’ve come off the tablets and things are really looking up. I love my new home and the area and we’re really looking forward to the summer and enjoying our new garden.”

Peter Roach, Chief Executive of Bournville Village Trust, said: “There are lots of reasons why people become homeless but the lack of affordable, high-quality housing only exacerbates the issue.

“We are proud to be working with Homes England to develop both homes for social rent and sale in Lightmoor, and helping families like Tina’s to enjoy all the benefits that come with a new home.

“Once house building is complete in Lightmoor, a quarter of the 1,000 homes will be for social rent which will contribute to the demand for affordable housing in the area.”

The Paddocks development, which is being built by developer Keepmoat, will be made up of two, three and four-bedroom houses and is expected to reach its half-way milestone by the end of the year.

Open space will play an important part in the development, with plans to create a beautiful Village Green featuring native wildflowers and a children’s play area.

Connections will also be made to Lightmoor Village’s existing cycle and footpath network to encourage residents to enjoy an active lifestyle and the outdoors.

The Paddocks forms the fifth phase of Lightmoor, which was inspired by chocolate-maker George Cadbury’s Bournville garden village in Birmingham.

The Village, a joint venture between Bournville Village Trust and Homes England, is currently home to over 1,000 people.

It includes a community centre, primary school and nursery, an extra care housing scheme and two parks. It will feature 1,000 homes once housebuilding is complete.