Heroic exploits of Laurence Cadbury to be revealed to school children 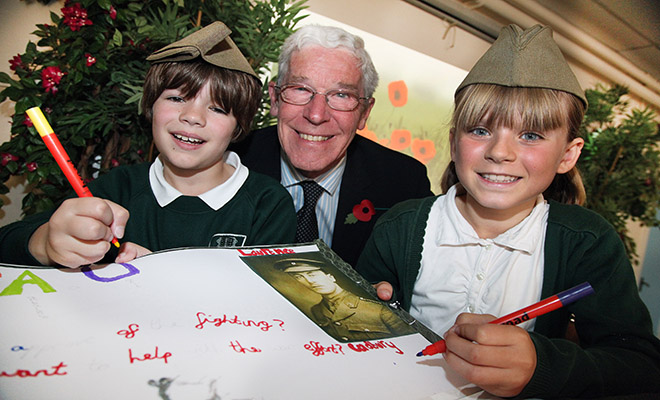 Nearly 100 pupils from a Birmingham school are to learn about the role played by one of the Cadbury sons in establishing an ambulance unit that treated thousands of casualties during the First World War.

Bournville Village Trust, set up by George Cadbury in 1900, will work with Bournville Junior School on Monday, 3 November, to highlight Laurence Cadbury’s part in founding the Friends Ambulance Unit (FAU).

The Unit, staffed mainly by conscientious objectors from Quaker families, sent over a thousand men to France and Belgium where they worked on ambulance convoys and trains with the French and British armies.

Laurence served with the unit as a transport officer from 1914 to 1919, receiving the Star with Bar and Military OBE by the British and the Croix de Guerre by the French authorities for his services.

Pupils will visit Dame Elizabeth Cadbury Hall in Bournville to be immersed in the story of Laurence and the Friends Ambulance Unit, designing propaganda-style posters and even learning some basic first aid.

They will also hear an account from Veronica Wootten, Laurence Cadbury’s daughter, and sow poppy seeds that will be cultivated in the school’s allotment before going on display in and around the offices of Bournville Village Trust.

“As the country marks 100 years since the start of the conflict, we wanted to share the significant role played by Laurence, a local man, with the children and in turn mark this symbolic anniversary in a special way within our community.”

Daniel Callicott, Museum Manager at Bournville Village Trust, who will lead the event, said: “Laurence’s life and the role he played in establishing the Friends Ambulance Unit is fascinating and as a Trust with direct links to the Cadbury family we wanted to share this important part of our heritage.

“The children will get to delve into Laurence’s story and hear about the kind of a person that he was from his daughter, Veronica. We hope the day will really bring Laurence’s story to life.”

After the First World War, Laurence was appointed to the Board of Directors at Cadbury’s as a Managing Director.

During the Second World War he chaired Bournville Utilities, a company set up to manage the production of war materials made in the Cadbury factory, including 5 million gas masks.

Later Laurence went on to become a Director of the Bank of England, sit on the Board of the Daily News, originally founded by Charles Dickens, and chair Bournville Village Trust for 24 years. He died in 1982 aged 93.

Bournville Village Trust is a housing association and charity which manages 8,000 homes on the Bournville estate and in Shropshire and provides services to around 25,000 people.