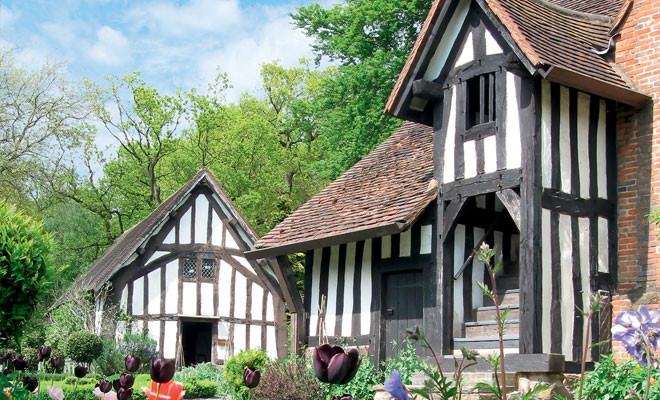 An historic 14th century building in Birmingham which was saved from destruction by George Cadbury in 1907 has been awarded £29,200 from the Heritage Lottery Fund.

Selly Manor was bought by George Cadbury 107 years ago after it fell into disrepair and was later meticulously dismantled and rebuilt in the heart of Bournville village.

Now a museum managed by Bournville Village Trust, Selly Manor offers visitors the chance to delve into Tudor history and to learn how people lived. It also houses the Laurence Cadbury collection of furniture.

The Trust, which is a registered charity, will use the money, and an additional £3,000 from the George Cadbury fund, to invest in audio tours including one especially for 11-16 year olds which will be recorded by pupils from Kings Norton Girls’ School and a digital 3D tour for disabled visitors.

It will also buy new Tudor-style costumes, which will be designed by an expert in Tudor fashion, for children and adults to try on during visits and new information books for each room of the museum.

In addition, some of the grant will be used to fund a community archaeological dig around the Selly Manor site, with the aim of uncovering medieval remains in that area.

Nicki Lupton, Learning and Interpretation Officer at Bournville Village Trust, said: “We are really pleased to receive this funding from the Heritage Lottery Fund.

“We’ll now be able to provide better resources for our visitors to help them get the most out of their visit and we’re really looking forward to welcoming a wider range of visitors and working with the local community on some exciting initiatives.

“We now have a wealth of new research about the building known as Selly Manor which we are really looking forward to sharing and we have some fantastic events planned to celebrate the 100 year anniversary of Selly Manors’ move to its current site.”

Duncan Cadbury, Chair of Bournville Village Trust, said: “Selly Manor was very nearly lost until George Cadbury acquired it and moved it at a cost of over £6,000 or around £250,000 in todays’ money.

“It is this unique heritage and its ability to bring the Tudor period to life that makes Selly Manor a very special place and we are confident that this funding will make the experiences of visitors even more memorable.”

Reyahn King, Head of Heritage Lottery Fund West Midlands, said: “This project will help to re-launch Selly Manor and celebrate the 100th anniversary of the historic building’s move to its present site.

“Research has uncovered previously unknown stories about the house and its occupants over time and these can now be shared anew with visitors.”

Selly Manor Museum is a Grade II listed building and was formerly the manor house of the Worcestershire village of Bournbrook, now in the Selly Oak ward.

It was built using oak box frames secured with pegs and packed with a mixture of wood, earth, dung and straw known as wattle and daub. The Museum is open to the public and hosts regular exhibitions, educational tours, workshops, weddings and civil ceremonies.

It is managed by Bournville Village Trust, which was founded by George Cadbury in 1900 and provides high quality, customer focused housing, maintenance and estate management services to people in Birmingham and Shropshire.

To find out more about the Museum, click here.