Historic bungalows built for Cadbury workers to have refurb 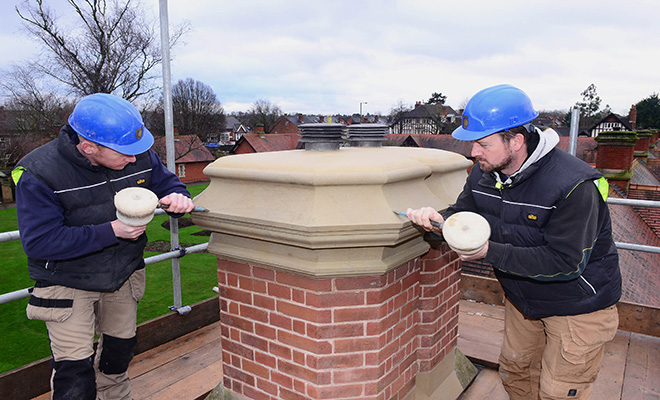 Historic bungalows originally built for retired Cadbury workers 119 years ago are to undergo refurbishment work this year to preserve their unique look.

The Quadrangle in Bournville, managed by housing association and registered charity Bournville Village Trust, will have its unique ornate chimney stacks renovated as part of an ongoing maintenance programme.

Constructed from handmade bricks and stone, the chimneys at the Quadrangle, built by George Cadbury’s brother Richard, are suffering from age and frost damage.

Given the building’s listed status, the Trust has employed expert stonemasons Treasures & Sons Ltd based in Ludlow, to carry out the repair and rebuilding work using traditional techniques.

Stone sourced from the same quarry as the original chimneys will also be used for the work and the Trust plan to restore all of the scheme’s 33 chimney stacks within the next five years.

Steve Fellows, Head of Asset Management at Bournville Village Trust, said: “The Quadrangle is often described as Bournville’s ‘hidden gem’ and this work is vital in ensuring that the building’s unique characteristics are conserved.

“We’ve sought experts stonemasons to carry out the work and help us bring the chimneys back to how they looked when they were first built 119 years ago.

“Importantly, over the last few years we’ve also installed new bathrooms, kitchens and boilers in the bungalows to ensure residents can live in a beautiful historic building but with modern facilities.”

Built in 1897, the Quadrangle is made up of 33 bungalows all set within beautiful grounds complete with its own clock tower and orchard.

They were built by George’s elder brother Richard Cadbury who never lived to see Bournville develop as he died from diphtheria in 1899.

Originally intended for retired Cadbury workers, the bungalows are still home to former employees today as well as non-Cadbury employees aged over 60.

Last year 160 metres of new ornate metal fencing was installed around the rear of the Quadrangle to protect its orchard and gardens from vandalism, and was funded in part by a £10,000 grant from Mondelez International which now own Cadbury.

Bournville Village Trust is a registered charity and housing association founded by chocolate-maker George Cadbury. It provides housing-related services to 8,000 homes in Birmingham and Telford and 25,000 people.