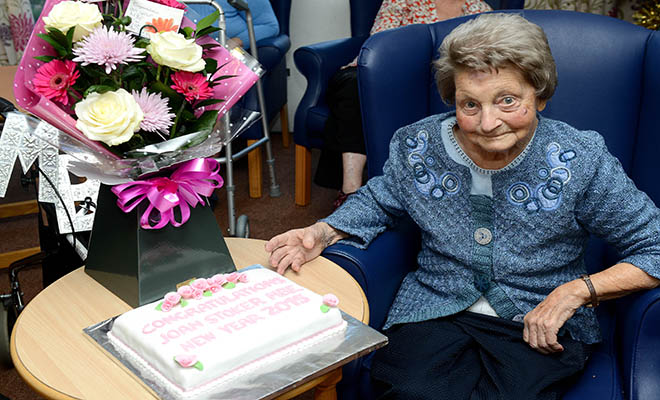 A 92-year-old grandmother of two who has been a member of the Girl Guides since 1936 has celebrated being awarded an MBE for her services to the community.

Joan Stoker was presented with flowers by Duncan Cadbury, Chairman of Bournville Village Trust, at a special tea party with friends and family at the Trust’s Selly Wood House nursing home where she now lives.

Joan, who has dedicated a staggering 75 years to carrying out ‘good deeds’, started as a volunteer with the Girl Guides when she was 14 years old, later becoming a patrol leader.

During World War II, she volunteered as a fire-watcher which saw her keep a vigilant eye out for the fall of incendiary bombs and pass on news of any fires that had broken out to the National Fire Service.

Joan, who was born in Bournville, also volunteered for the National Trust’s Back-to-Back Houses in Birmingham, the South Birmingham Talking Newspaper and the Royal Orthopaedic Hospital.

She has been a member of the Methodist Church since 1928,  later helping to organise youth and lunch clubs and she continues to read Bible lessons in church services.

Speaking about her MBE, Joan said: “When I received the letter about the MBE I thought they must have made a mistake. I was very surprised and didn’t believe it at first.”

Duncan Cadbury, Chairman of Bournville Village Trust, said: “Joan is a remarkable woman who has given so much to her community. She is a true inspiration and an example of just what can be achieved with a little determination and a huge amount of passion.”

Andrew Stoker, Joan’s son who nominated her for the MBE, said: “Mom has constantly been motivated by her sense of duty to the community, wanting to use her skills and experiences from one context in another.

“While she has served longest in the Methodist Church, the Girl Guides Association and in education and related activities, the sheer breadth of her interests and activities demonstrates her commitment to her community and the desire to improve any situation in which she finds herself.”

Joan was the Chair of the Wyndham Gardens Waterloo Housing Trust Residents’ Committee, previously acting as secretary to the Committee, and was also a lay assessor for residential homes for Birmingham City Council for nine years.

As well as her dedication to voluntary work, Joan also worked as a school secretary and non-qualified teacher at various schools including Holy Trinity School in Bordesley and Bournville Junior School.

Joan, who has two children Andrew and Ruth and was married to husband Ronald, later publicised the work of Holy Trinity School and its head teacher Deirdre McDowell MBE in her published book ‘The Angel of Camp Hill’.