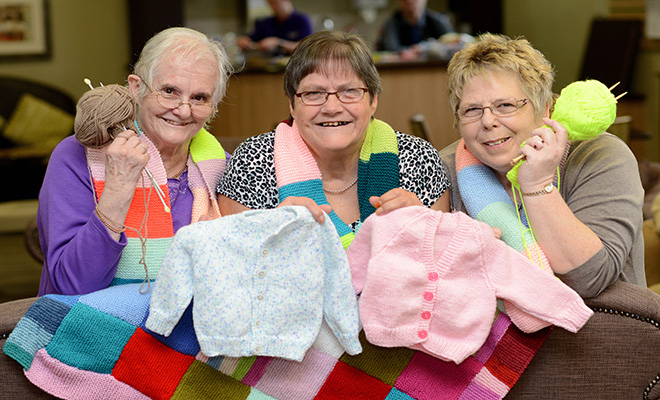 Real life ‘knitting nanas’ from Telford are appealing for donations of wool to help them sew bonnets and blankets for babies in Africa.

The group, who have affectionately named themselves after the grans in the Shreddies cereal advert, meet every Tuesday at Bournville Village Trust’s Bournville House in Lightmoor Village.

Their latest project is knitting beautiful bonnets, cardigans and blankets for ‘mama bags’ which are handed out to mums-to-be in Africa by the charity Greenfields Africa.

Used in a bid to encourage women to attend antenatal classes, the bags are given to mums in remote areas of Uganda and Kenya, which have some of the highest rates of infant mortality in the world.

However, the ‘knitting nanas’ fear that they won’t be able to make as many bonnets, blankets and cardigans as they’d like without much-needed donations of wool.

Fiona Bott, a grandmother-of-three who leads the knitting group, said: “So far we’ve made 12 cardigans and 12 bonnets but we’d like to do a lot more.

“Donations of double knitting wool, in any colour and amount would be gratefully received as we want to make a rainbow of brightly coloured garments for these mums and their children.

“We’d also welcome any other ideas for future knitting projects so that we can keep busy.”

Ruth Evans, Extra Care Manager of Bournville House, said: “We’re very proud of our ‘knitting nanas’ who are doing a great job making clothes for a very worthwhile cause.

“As well as donations of wool, they’re also keen to recruit more members so if anyone is interested, please get in touch.”

The ‘knitting nanas’ group is based at Bournville House, an extra care scheme made up of 59 apartments, and managed by Bournville Village Trust and the Accord Group.

To donate wool, or suggest future projects for the group, please call Danielle at Bournville House on 0121 667 1022.