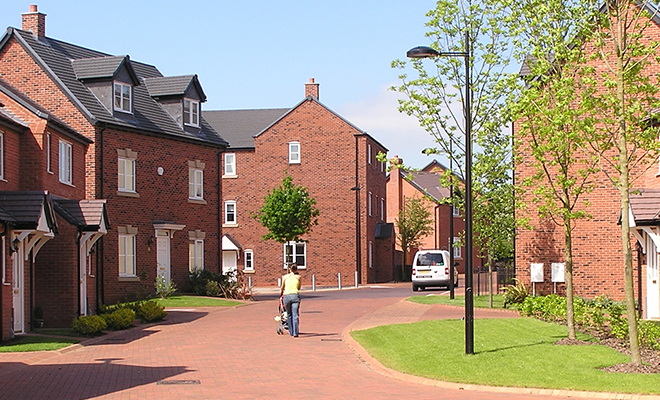 A £45 million major housing development in Telford which will create a new 800 home village once it is complete has reached the half way mark.

Over 400 homes have now been built in Lightmoor Village, which is being developed through a joint venture between Bournville Village Trust and the Homes and Communities Agency (HCA).

A quarter of the homes in the village, dubbed the ‘second Bournville’ after taking inspiration from the Birmingham village created by chocolate-maker George Cadbury, will be available for social rent.

It is hoped that the homes will help to tackle the region’s chronic shortage of affordable housing, which according to the National Housing Federation (NHF), stands at only half of what is needed to meet demand.

Another 200 homes could also be in the pipeline for the village, with outline planning permission granted to develop land adjacent to the site. Detailed plans are currently being considered by Telford and Wrekin Council.

Peter Roach, Chief Executive of Bournville Village Trust, said: “This milestone signals an important stage in the development of the village, which once complete will be home to hundreds of families.

“As well as meeting housing demand, building new homes and the infrastructure to support them has a positive impact on the local economy by creating jobs and injecting money into the area.

“It’s vital that we continue to build new homes and communities and we’re proud to be continuing to play our part in this in Telford in partnership with the Homes and Communities Agency.”

Christine Addison, Executive Director for the Midlands for the HCA, said: “We are delighted to have reached this significant milestone on the joint venture project with Bournville Village Trust.

“Lightmoor Village has benefitted from significant investment from the HCA and is a fantastic example of our work to create great places, with investment going into both these new homes and other facilities such as a new primary school to create a strong and integrated community for local residents.”

Lightmoor Village has been heavily inspired by Bournville model village in Birmingham, created in 1900 by chocolate-maker and philanthropist George Cadbury. Hailed as an exemplar for garden cities, Bournville features open spaces, community facilities, shops and schools.

In Lightmoor, these features, including a community centre, primary school and parks, have been replicated with a modern twist to ensure that they meet the needs of families today and in the future.