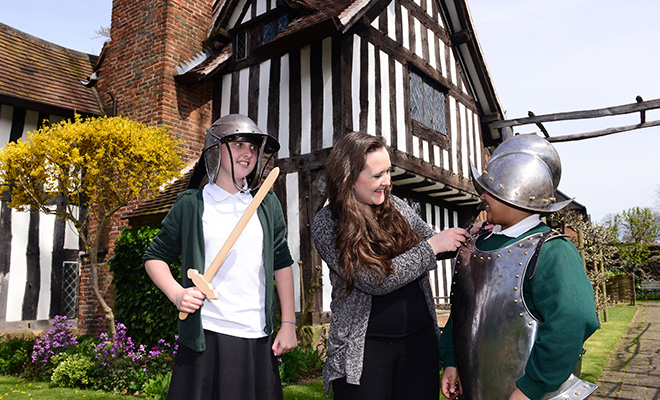 It was the timber Tudor manor house saved by chocolate-maker George Cadbury in a bid to educate the people of Birmingham about “bygone times”.

Now 100 years on, the building rescued from destruction by Mr Cadbury has been recognised with a national award for its outstanding educational work with schools.

Selly Manor Museum, in Bournville, has been awarded the sought-after Sandford Award for Heritage Education, which recognises excellence in heritage education.

Judges praised how Selly Manor, which dates back over 500 years, engages with children, its interactive approach to education and the quality of its staff.

The Museum’s school visits include fascinating historical guided tours and fun-filled activities, all led by its expert and friendly staff.

Selly Manor Museum is one of over 40 museums to be granted the award by the Heritage Education Trust and Bishop Grosseteste University this year. Others include; The Shakespeare Birthplace Trust, Tower of London and Tamworth Castle.

“We receive fantastic feedback from both the teachers and children that visit the Museum and are proud to provide such an important opportunity to learn about the past.”

Peter Roach, Chief Executive of Bournville Village Trust, which manages the Museum, said: “Over 6,000 pupils from across the Midlands visit the Museum each year to learn what life was like at Selly Manor hundreds of years ago.

“The Museum has worked very hard over the last couple of years to fine tune its educational provision and this award is very much a testament to that.”

The award comes as Selly Manor Museum, which is Grade II listed, marks 100 years since it was saved from demolition and rebuilt in Bournville by George Cadbury.

In a letter to his son Laurence, George extolled the importance of saving Selly Manor saying it was ‘educational’ and ‘needed for a new town like Birmingham’.

To give the building a better future, he had it carefully taken down piece by piece, moved to its current site and opened it as a Museum in 1916.

Since then, Selly Manor Museum has welcomed thousands of visitors and regularly hosts special events, adult workshops, exhibitions and weddings.

For more information about the Museum, visit sellymanormuseum.org.uk

Selly Manor Museum is managed by Bournville Village Trust, a charity and housing organisation founded by George Cadbury in 1900.