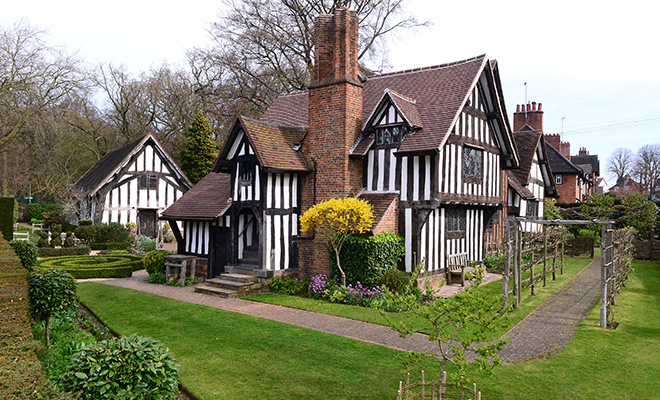 Selly Manor Museum is to throw open its doors for a series of free and low cost special events to mark its centenary.

The Museum is celebrating 100 years since it was saved from demolition, moved piece-by-piece to Bournville, and opened by chocolate-making philanthropist George Cadbury.

Since then it has welcomed thousands of visitors from across the world who have explored its fascinating exhibits, dressed up in Tudor-style costumes and learnt all about life 500 years ago.

Celebrations will start on 12th June with a fantastic free Edwardian-style tea party to thank Bournville residents and visitors to the Museum for their support.

The party will feature free tea and cake, garden games, entertainment – including Professor McGinty’s Amazing Flea Circus – and live music. Due to limited places, people are asked to book by 18th May to avoid disappointment.

In August, visitors are invited to a free exhibition charting the history of Selly Manor from its earliest known origins in 1476, to the present date.

The exhibition, which will run from 2nd-19th August, will include never-before-seen heritage photographs dating back to 1916 showing the Museum’s move and reconstruction.

The photographs will include some from the personal albums of William Alexander Harvey – the architect responsible for many of Bournville’s Arts and Crafts homes.

There will also be two heritage talks on 8th September and 13th October for just £2 per person – including one by Cadbury family descendant Duncan Cadbury.

Daniel Callicott, Selly Manor Museum Manager, said: “This is such an important year for the Museum so we wanted to put on some extra special events that celebrate the building and its unique history.

“We also wanted to thank and celebrate the centenary with people living in Bournville and the wider area who have shown great support for the Museum over the years.

“The special events, which are either free or at a low cost, will be in addition to our full and exciting events calendar, which includes family fun activities, exhibitions and workshops.”

Dating back to 1476, Selly Manor was originally thought to be the manor house for Selly until recent research revealed it was in fact a prosperous house that was home to a host of colourful characters.

It slowly fell into disrepair until, busy overseeing the build of Bournville, it was spotted by George Cadbury who had it carefully taken down and moved to its current site.

For more information about the Museum, which is managed by Bournville Village Trust (BVT), visit sellymanormuseum.org.uk