New hands-on experiences at Museum thanks to £30k funding boost 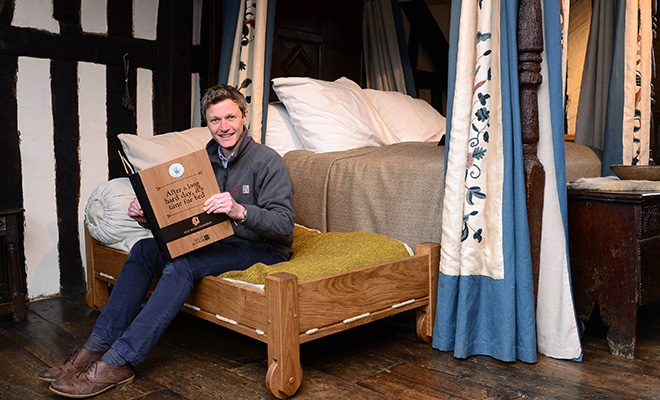 Visitors to a Birmingham museum founded by world famous chocolate-maker George Cadbury can enjoy a raft of new interactive experiences thanks to a £30,000 funding boost.

Selly Manor Museum, in Bournville, now boasts audio and digital 3D tours as well as beautiful Tudor costumes for adults and children to wear thanks to a grant from the Heritage Lottery Fund.

To experience what bed time was like in the Tudor period, visitors can also now try out a replica truckle bed – which is where maids would normally have slept.

There are also new information books in each of the Museum’s six rooms, a children’s activity trail, a guide book telling the story of the building, which dates back to 1474, and more objects for visitors to pick up and handle.

The Museum, which last year celebrated its centenary, will also soon launch a tour for blind and partially sighted people, which has also been funded by the project.

It’s hoped the improvements, which also received funding from a private donor, will help to bring the history of the impressive house to life for visitors.

Nicki Lupton, Education and Interpretation Officer at Selly Manor Museum, said: “Selly Manor Museum is packed full of history and this funding has allowed us to bring this to life with the changes we have made.

“Last year, we welcomed over 18,000 visitors and 175 schools and we’re looking forward to welcoming even more people to Selly Manor from the local area and beyond this year to share in our unique Museum and the fantastic stories it has to tell.”

Duncan Cadbury, Chair of Bournville Village Trust – which manages Selly Manor Museum – said: “When George Cadbury founded Selly Manor Museum he did so with the wish that it would help to inform and engage people about ‘bygone times’ and these brilliant new interactive exhibits will do just that.

“Visitors won’t just be able to read and see how people lived in Tudor times, but actually experience it too by trying out the new truckle bed and dressing up in a fantastic array of outfits. I think George would be very proud of how the Museum has developed and changed over the last few years, and helped to educate so many people.”

Originally thought to be the manor house for Selly (now Selly Oak), Selly Manor was in fact a prosperous house that was home to a host of colourful characters and families. In the 19th century, it was split into three small cottages and became known as The Rookery, housing 21 people in cramped and squalid conditions.

It slowly fell into disrepair until it was spotted by George Cadbury who had it taken down piece-by-piece and moved to its current site. By the time work was complete in 1916, The Rookery had a new name – Selly Manor – and today, it educates visitors and schools on how people cooked, dressed and lived 500 years ago.

The Museum is managed by housing association and charity Bournville Village Trust, which was also founded by George Cadbury.

For more information about the Museum, visit sellymanormuseum.org.uk

The Museum’s next event will be The Great Selly Manor Egg Hunt from 12th-19th April where children can hop on down to enjoy family-friendly Easter-themed craft activities.

Plus, there will also be a Great Egg Hunt with a prize for all the little ones. The event runs from 10am-5pm (weekdays) and 2pm-5pm (weekends) and is £4 for adults, £3 for concessions and £2.50 for children.