Pavilion steeped in sporting past to open new £600,000 changing facility 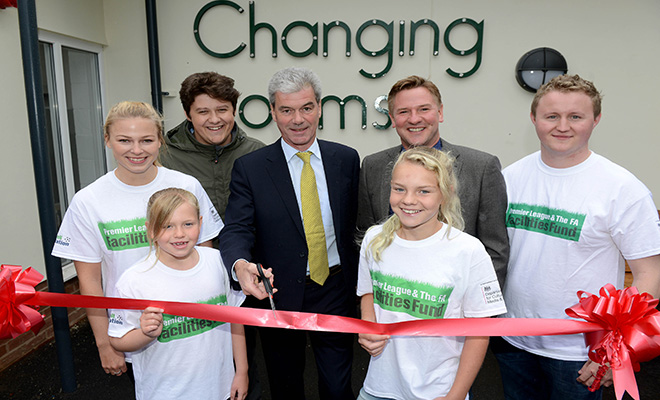 A popular historic Pavilion originally used as a clubhouse by Cadbury workers is to open a brand new £600,000 plus changing facility in a bid to boost grassroots football.

Rowheath Pavilion in Bournville, opened in 1924 by the Cadbury family for workers of its chocolate factory, will unveil the £679,672 building on Monday 31st August.

Nigel Cadbury, a Trustee at Bournville Village Trust, will officially open the building.

It has been funded by a £492,444 grant from the Premier League & The FA Facilities Fund, which is delivered by the Football Foundation. Rowheath Pavilion has also received funding and support from Bournville Village Trust and Birmingham City Council.

It is hoped that it will encourage the uptake of grassroots football, as well as provide more modern facilities for teams that currently play there.

“From tennis and bowling to cricket, rugby and football, Rowheath used to host them all and in one season alone nearly 700 sports matches were played there.

“Thanks to the help of our supporters, we’ll now be able to re-energise Rowheath as a modern sporting facility for scores of people to use and enjoy today.”

Peter Roach, Chief Executive of Bournville Village Trust, said: “Rowheath has developed into a well-used community hub over the last few years as well as a home to multiple football teams and other sports groups.

“We are very pleased that with our support and that of others, Rowheath will now be able to develop further and provide a fit-for-use, modern facility that will encourage more people to take part in sport.”

“First-class facilities like this are crucial to creating more opportunities for local people to enjoy regular sport.”

To celebrate the opening, Rowheath Pavilion, which is managed by charity the Trinity Christian Centre Trust with support from Bournville Village Trust, will host a market with family fun activities on Monday 31st August from 9am to 2pm.

The Premier League & The FA Facilities Fund is funded by the Premier League, The FA, and the Government, via Sport England. It is delivered by the Football Foundation, the country’s largest sports charity.

Since it was launched in 2000, the Foundation has awarded around 13,000 grants worth more than £530m towards improving grassroots sport, which it has used to attract additional partnership funding of over £740m – over £1.3bn of investment into the grassroots game.

Since 2000 the Football Foundation has worked with the Birmingham County FA to deliver £21.5m worth of investment into 321 grassroots sports projects worth more than £54.9m across the whole of the Birmingham region.