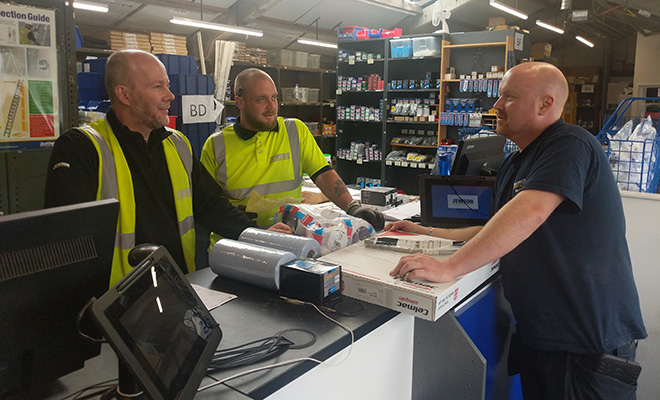 An 86-year-old Birmingham man has been reunited with his wife’s lost engagement ring after it was spotted by a gas engineer.

Mark Searles, from Bournville Village Trust, (pictured right) found the ring wedged down the back of a radiator whilst he was servicing a boiler in Trevor Hemmings’s home in Bournville.

The pensioner had searched high and low for the ring which had been missing, along with his wife Rose’s wedding ring, since Christmas.

The engagement ring holds huge sentimental value for Trevor as Rose, who he has been married to for 60 years, has dementia and had to move into a home in January.

Mr Hemmings, who used to work for Bournville Village Trust and Cadbury’s, said: “I couldn’t believe it when Mark found the ring, I nearly burst into tears.

“I’ve been married to my wife for 60 years and we did everything together. I cared for her myself right until she had to go into hospital and then the home. I turned the house upset down looking for the ring and I couldn’t find it.

“Mark is a lovely lad, he did a wonderful job fixing what he did and then to find the ring. I just couldn’t believe it.”

Trevor’s daughter Debi Levens, added: “My dad had managed to find my mom’s wedding ring but was still looking for the engagement ring up right up until a couple of weeks ago. He would empty cupboards and go room by room trying to find it.

“We’re so pleased it’s been found and my dad can have peace of mind. We haven’t been able to see my mom for a while due to lockdown restrictions, so it’s very special to us all that the ring has been found.”

Mark Searles, who has been a gas engineer with community-based housing association Bournville Village Trust for 16 years, said: “I went to service the boiler and was just feeling for leaks around the radiators to see if there were any that could cause the pressure to drop. I saw just behind one of the pipes a ring and showed it to Trevor.

“He almost broke down and told me he was lost for words. I think I’m quite a ‘manly man’ but I was almost in tears too. It was really nice to have made Trevor’s day.”

The couple, who lived in Bournville for most of their married lives, met in 1956 when Trevor was working as a roofer on the town hall in Birmingham and Rose was a clerical assistant. Trevor’s daughter said her father would wolf whistle at Rose to get her attention.

Rose later worked at Cadbury’s filling Milk Tray boxes and Trevor worked at both Cadbury’s and for Bournville Village Trust as a labourer. They married at St Gabriel’s in Weoley Castle in 1960 and have a daughter Debi and son David.

Bournville Village Trust is a community-based housing association and registered charity whose mission is to create and sustain communities where people can thrive. It provides services to 8,000 homes and 25,000 people in Birmingham and Shropshire.