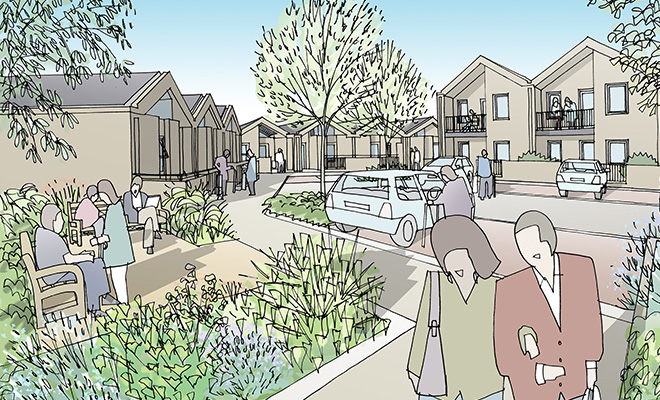 A development of innovative cottages featuring technology to boost older people’s independence could be built in Bournville if plans for the latest stage of a flagship £60million housing and care village are given the go-ahead.

Bournville Village Trust and the ExtraCare Charitable Trust have submitted plans for the homes, which would form the third phase of the College Green Care Village on Bristol Road South.

If approved by Birmingham City Council, the 16 two and three-bedroom cottages would be available for people aged over 55 to buy from next year, with each featuring state-of-the-art technology.

Designed to meet the needs of older people now and in the future, each cottage will feature full size shower rooms, ‘knockout panels’ in walls to incorporate hoists between bedrooms and shower rooms and charging points for mobility equipment.

There will also be ‘soft spots’ in the floor constructions of the homes to incorporate ‘through-floor lifts’ if needed.

It’s hoped the new homes will help some of the many older people who are reported to want to downsize, but can’t because of a lack of suitable housing.*

Peter Roach, Chief Executive of Bournville Village Trust, said: “One in three people aged over 55 in the UK want to downsize but can’t because of the lack of suitable housing. This means that many older people effectively become trapped in homes that don’t meet their needs anymore.

“These homes will offer older people in Birmingham the chance to downsize and benefit from the other fantastic facilities planned for College Green, including a health and well-being centre.”

Mark Curran, Development and Sales Director for the ExtraCare Charitable Trust, said: “We are delighted to be developing these cottages, which follow the success of our partnership’s 212 home Bournville Gardens Village, which opened last year and is now oversubscribed.

“Increasing numbers of older people are seeking to downsize into homes which are safe, secure and linked to innovative care and technology services; these cottages should provide a great solution.

“They are also located close to a thriving retirement village that provides a host of leisure facilities and an inspirational community lifestyle.”

College Green, which is being built on the former site of Bournville College, will be home to over 400 people once complete and create around 100 jobs.

It will combine housing for older people, including affordable homes for rent, with onsite health and social care facilities such as a GP practice and pharmacy.

There are also plans to include accommodation to support people discharged from hospital to get back on their feet – helping to ease pressure on local hospitals.

Work to complete the second part of the 9.3 acre development, a £5.3 million nursing home managed by Gracewell, is expected to be complete by the autumn.

The first phase, 212-home Bournville Gardens Retirement Village, opened in October 2015 and is being managed by the ExtraCare Charitable Trust.

College Green is being developed by Bournville Village Trust in partnership with the ExtraCare Charitable Trust, Gracewell, Birmingham City Council and the Homes and Communities Agency (HCA).

Bournville Village Trust is a registered charity and housing association founded by chocolate maker and philanthropist George Cadbury in 1900.