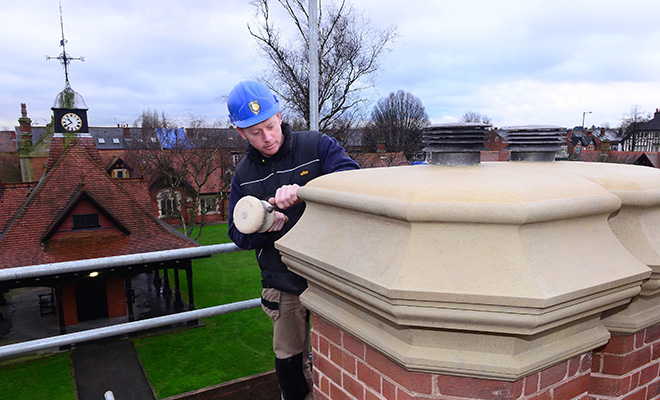 A project to preserve the special look of one of Bournville’s most iconic and historic buildings has been shortlisted for a top regional award.

Bournville Village Trust has made it through to the final of the West Midlands Celebrating Construction Awards 2016 for its restoration work at the Quadrangle.

Built in 1897, the building, which is made up of 33 bungalows, was constructed by George Cadbury’s brother Richard especially for former Cadbury factory workers.

As part of work to preserve the beautiful building, Bournville Village Trust has used traditional techniques to restore some of its unique ornate chimney stacks.

The stacks, damaged by age and frost, have been renovated by expert stonemasons using stone sourced from the same quarry as the original chimneys.

Bournville Village Trust will now compete against three other organisations to win the Heritage accolade at the Awards on 13th May at the ICC, Birmingham.

Steve Fellows, Head of Asset Management at Bournville Village Trust, said: “We are really pleased to be shortlisted for this fantastic award.

“Conserving the unique heritage of Bournville’s buildings is very important to us as is ensuring that the homes that residents live in are comfortable and in good repair.

“This is why as well as carrying out work to restore the chimneys, we have also invested in new ‘A’ rated condensing gas boilers, bathrooms and kitchens in the bungalows at the Quadrangle.”

The Quadrangle, often described at Bournville’s ‘hidden gem’, is managed by subsidiary of Bournville Village Trust – Bournville Almshouse Trust and is home to people aged over 60.

Previous refurbishment work to the building has included new lighting, pathways, new ornate fencing, and the replacement of railings and gates to the perimeter which were removed as part of the war effort.

The West Midlands Celebrating Construction Awards 2016 celebrate the regional construction highlights of the year and the very best industry projects.

Over 600 leaders and innovators from across the construction sector are expected to gather at the ICC for the awards, which are co-hosted by Acivico Limited, the Built Environment Hub and the Chartered Institute of Building’s (CIOB) West Midlands branch.

Bournville Village Trust is a registered charity and housing association founded by chocolate-maker George Cadbury.  It provides housing-related services to 8,000 homes in Birmingham and Telford and 25,000 people.