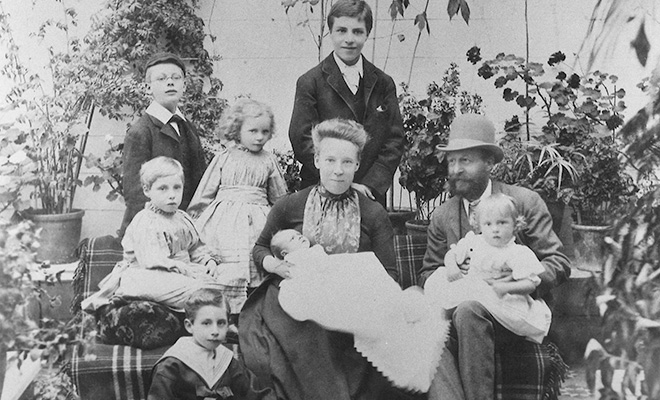 Never before seen family photographs of the man voted the city’s ‘Greatest Brummie’ have been revealed for the first time.

The photographs of George Cadbury, named Brum’s greatest in an online poll by Birmingham St Mary’s Hospice last year, are in contrast to those normally seen of the man who left a lasting legacy to the city.

Uncovered in the archives of Bournville Village Trust, they show George in 1890 bouncing one of his seven children on his lap at the family home, Northfield Manor House.

Others show George, who took responsibility for the world-famous Cadbury factory aged just 22, with his second wife Dame Elizabeth and some of his many grandchildren.

In another George, who developed Bournville around his factory, is pictured with a rose in his lapel a reminder of his famous quote ‘no man ought to be condemned to live in a place where a rose cannot grow.’

Gillian Ellis, Heritage Manager at Bournville Village Trust, said: “Often the images that we see of George are of him as a successful businessman and entrepreneur. These fantastic images show a different side to him, a caring family man who enjoyed spending time with his children and grandchildren.

“He also cared deeply about the environment too, which the rose in his lapel hints at, donating Lickey Hills Country Park to Birmingham, planting a fruit tree in every garden in Bournville and inviting children from the inner city to enjoy the village’s open spaces.

“We hope these archive images show a different side to George and the wonderful man that he was.”

Selly Manor Museum, managed by Bournville Village Trust, is inviting families to celebrate George’s legacy, and the village he created around the factory, at its May half term event.

‘George’s Fantastic Festivities’ will run from Monday 27th to Friday 31st May, 10am – 5pm, and visitors can explore a world of days gone by with Victorian festivities.

As well as traditional toys and parlour games, there will be a puppet theatre, creative crafts and a special George Cadbury trail.

No booking is required and the event costs £4 for adults, £2 for children and £12 for a family ticket (two adults and three children), which includes entry to the Tudor manor which George saved.

Opened by George Cadbury, Selly Manor Museum is one of Birmingham’s most historic visitor attractions and welcomes thousands of people, including school children, every year. Made up of two distinct buildings, it brings Tudor history to life with interactive exhibits, tours, talks and special events.

George opened the Museum after he rescued it from destruction and much of its beautiful collection was donated by the chocolate-maker’s son Laurence.