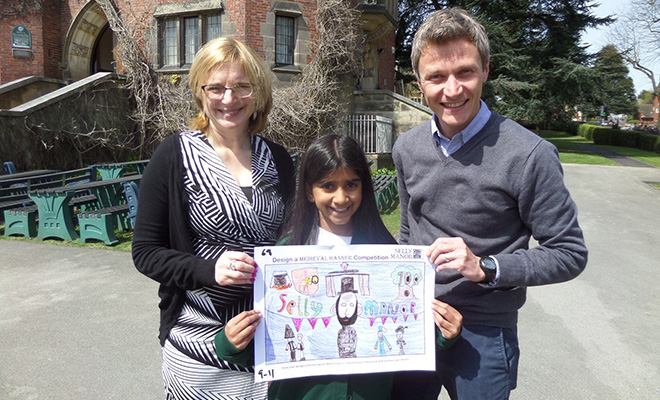 A Bournville schoolgirl has beat hundreds of other pupils to win a competition to design a magnificent wall-hung banner to mark a museum’s 100th anniversary.

Selly Manor Museum, founded by chocolate-maker George Cadbury, invited children across the West Midlands to design a medieval banner in homage to its centenary.

Over 300 youngsters entered the competition which was judged by George Cadbury’s great-grandson Roger Cadbury and staff from the Museum.

Liyah Yasin, a pupil at Bournville Junior School, was chosen as the winner and will now see her design made into a real banner by an expert in historical design.

It will be unveiled at the launch of Selly Manor Museum’s centenary exhibition in August and will then go on permanent display for thousands of visitors to enjoy.

Runners up Thenuki Perera from Bournville Infant School, Haseeb Irfan from Woodrow First School in Redditch and Freya Battye from Bournville Junior School will each receive a book token and free family ticket to the Museum.

Daniel Callicott, Manager of Selly Manor Museum, said: “The quality of entries was fantastic and it was a very difficult job for the judges to pick an overall winner.

“What really stood out about Liyah’s design was the attention to detail, its colourful imagery and how much it reflected the things that we think make Selly Manor Museum so special.

“Our design expert has already made a start in creating Liyah’s banner and we can’t wait to unveil it at the launch of our very special centenary exhibition later this year.”

As well as having her banner design made and displayed at the Museum, Liyah will also receive a book token, free family annual pass and a free visit to the Museum for her class.

Liyah Yasin, aged 10, said: “I was amazed with the fact that I had won the Selly Manor Banner competition and I am very proud of myself.”

Claire Williams, head teacher at Bournville Junior School, said: “We are extremely proud of Liyah for her winning entry.

“As a school we were keen to participate in such a prestigious event for Selly Manor. It’s great to support our local community in such a way.”

Dating back to 1474, Selly Manor was originally thought to be the manor house for Selly until recent research revealed it was in fact a prosperous house that was home to a host of colourful characters.

The Museum is managed by housing association and charity Bournville Village Trust.

For more information about the Museum, visit the website www.sellymanormuseum.org.uk