Stalwart sparky to light up Christmas tree for last time 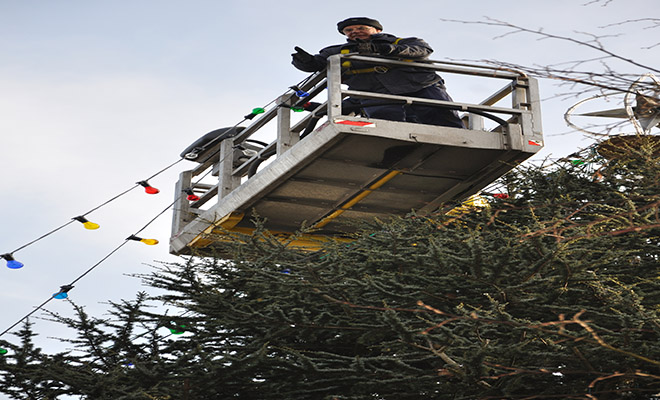 A Bournville electrician who has been lighting up the village’s iconic 60-foot Christmas tree nearly every year since he was 16 years old is to retire.

Geoff Davis, who works for Bournville Village Trust, will decorate the tree on the Village Green with 650 beautiful coloured bulbs for the last time on Monday, 1 December, after nearly 50 years.

The 65-year-old grandfather-of-two first started to adorn the Christmas tree, thought to be the largest in the Midlands, for the Trust in 1965 when he worked as an electrician for local firm Harry Ward Limited.

Geoff continued to decorate the Atlas Cedar tree, including placing a 55-year-old star at the top of it, each year – only missing a couple of occasions due to ill health and a short change of job.

In 2007, Geoff began working directly for Bournville Village Trust’s PropertyCare Services where he continued the tradition of lighting up the tree, enjoyed by thousands of local people.

Geoff, who is married, has two daughters and lives in Selly Oak with his wife Carol, said: “At 16 years old, I never imagined that I’d still be hanging up the lights.

“It takes a team of eight of us nearly a whole day to do and you have to have a head for heights as the crane we use is one of the tallest in Europe. The weather can be a problem too and we’ve faced all sorts, including fog and snow, but it’s well worth it when you hear how much it means to people.

“One man who was driving past it to visit his parents in the hospital told me that every time he saw the lights they would cheer him up, it’s very special.”

Steve Fellows, Head of Asset Management at Bournville Village Trust, said: “As well as decorating the Christmas tree, Geoff also hangs lights at the Trust’s nursing home, retirement scheme and the shops on the Village Green, bringing joy to thousands of people.

“He really is the man who lights up Bournville and although he will be sadly missed when he retires next year, we have an excellent team of electricians and apprentices who will carry on the much-loved tradition.”

The Christmas tree was planted in 1948 to commemorate the 90th birthday of Dame Elizabeth Cadbury, wife of George Cadbury who founded Bournville Village Trust in 1900.

This year, the light switch on will take place on Tuesday, 2December at a festive evening organised by the Bournville Village Council.

For more information about the event, www.bournvillevillagecouncil.org.uk/christmaslights

Bournville Village Trust  is a housing association and charity which manages 8,000 homes and provides services to around 25,000 people across Birmingham and Shropshire.