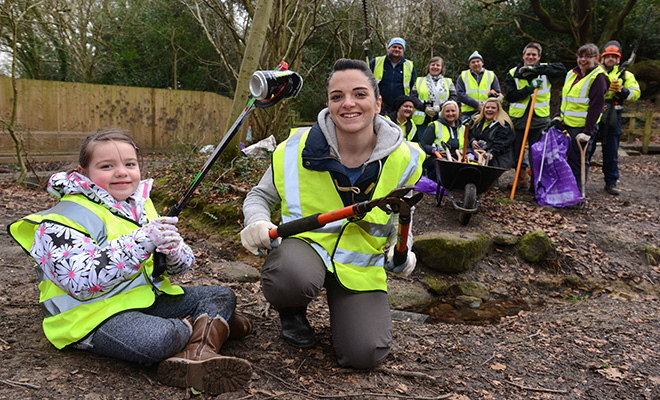 A clean-up campaign inspired by the Queen’s 90th birthday has seen schools, residents and community groups all muck in to brighten up streets in Birmingham and Telford.

The Big Tidy Up, organised by housing association Bournville Village Trust, saw over 50 volunteers tidy up areas in Bournville, Selly Oak, and Northfield in Birmingham.

Work ranged from litter picking and gardening to cleaning and painting, and saw over 75 rubbish bags filled by volunteers during the week-long campaign.

The Tidy Up was inspired by Keep Britain Tidy’s Clean for the Queen campaign, which is aiming to clear up Britain in time for her majesty’s 90th birthday.

Jessica Allan, Community Development Manager at Bournville Village Trust, said: “We would like to thank everyone who took the time to support our Big Tidy Up.

“It was fantastic to see people of all ages, from school children to retired residents, who take pride in their community come together to make a difference.

“A number of volunteers expressed an interest in continuing the good work, so we’ll be donating litter pickers to them to use in the future.”

The Big Tidy was supported by a number of businesses and organisations who donated equipment and supplies, including: Hattrick Embroidery, Singletons at Lydiate Ash Plant Centre, Buildbase, Tesco, Wilkinsons, Meadowdale Nursery and Telford & Wrekin Council.

Bournville Village Trust is a housing association and charity founded by chocolate-maker George Cadbury in 1900. It provides services to 8,000 homes and 25,000 people in Birmingham and Telford.

The Trust is committed to protecting and enhancing green and open spaces and last year Bournville Village Green was unveiled as a Green Flag Award winner – the mark of a quality park or green space.