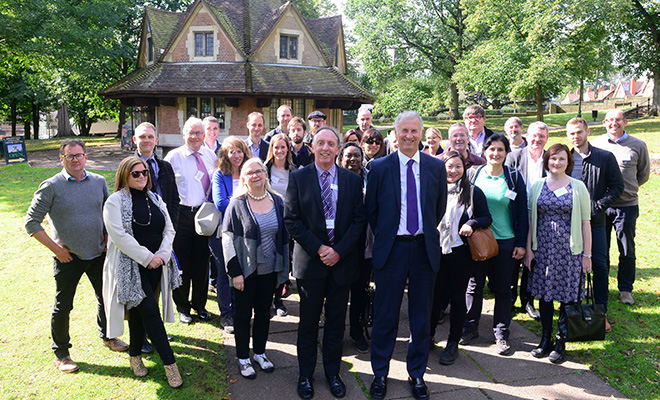 Council leaders and housing experts have visited Bournville to see how its award-winning garden village principles could inspire future developments and ease the housing crisis.

The 30 delegates toured the village, managed by Bournville Village Trust and home to 25,000 people, to look at examples of its design, infrastructure and stewardship.

They visited Bournville’s award-winning Village Green, met residents and toured a new £60m housing and care development which will be home to over 400 older people once complete.

Earlier this year the government announced plans for 14 new garden villages to ease the housing crisis, sparking a renewed interest in this type of development.

The visit, on 12th September, was organised by the Town and Country Planning Association (TCPA), the country’s leading planning charity and think tank.

Peter Roach, Chief Executive of Bournville Village Trust, said: “Bournville may have been developed 124 years ago, but there is still much that planners and developers can learn from its success.

“As the country’s first garden village it introduced the benefits of open space into modern town planning and continues to thrive today, even influencing our new garden village in Telford.

“To work with the TCPA to share the ingredients of Bournville’s longevity and the importance of long-term stewardship to those planning on creating new garden villages is a great opportunity for the Trust and Birmingham as a whole.”

Katy Lock, Garden Cities & New Towns Policy Manager at the Town and Country Planning Association, said: “The original garden villages were based on a strong foundation of industry and employment, stewardship, community facilities and the promotion of healthy lifestyles. Today these characteristics are more important than ever.

“The study tour provided an opportunity to understand the characteristics of garden villages old and new, with a view to ensuring that new villages avoid being dormitory suburbs and instead become vibrant, diverse and affordable new communities.”

As well as touring Bournville, the delegates also visited Lightmoor village in Telford which is being developed by the Trust and the Homes and Communities Agency.

Inspired by Bournville, it will feature 1,000 new homes as well as a host of community facilities once complete and more than half the village will be used for parks and open spaces.

In association with BVT, the TCPA is now producing a short guide to accompany the tour. ‘Understanding Garden Villages’ will be published by the TCPA later this month and available at

Bournville Village Trust is a charity and housing organisation founded by chocolate-maker and philanthropist George Cadbury in 1900.