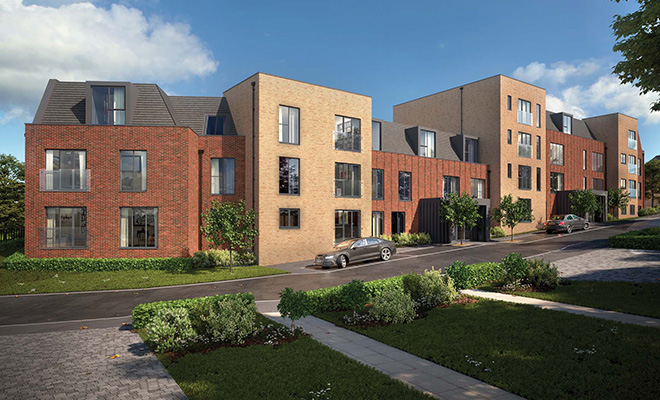 An historic trust has struck a deal to manage rented and shared ownership homes at a major Birmingham housing development once home to its founder George Cadbury.

Bournville Village Trust has agreed to acquire and manage some of the 138 homes at the Manor House site in Bournville, which is being developed by Crest Nicholson.

Known locally as Bournville Park, the site was once home to Northfield Manor House – the residence of the Trust’s founder George, and his wife Elizabeth, until the latter’s death in 1951.

Now a mix of apartments and homes are set to be built on the Bristol Road South site, with 15 earmarked for shared ownership and five for social rent.

Work on the site will also include plans to rebuild Northfield Manor House, which was demolished after being severely damaged in an arson attack three years ago.

Peter Roach, Chief Executive of Bournville Village Trust, said: “We are very pleased to be working with Crest Nicholson to provide new and affordable housing for sale and rent in Bournville.

“The average house price in the area is over £261,107*, so to be able to offer these new affordable shared ownership homes to first time buyers is a fantastic opportunity.

“The history of the site and its link to our founder George Cadbury was also an important consideration in our decision to partner with Crest Nicholson.”

David Hnyda, Sales and Marketing Director at Crest Nicholson’s Chiltern division, said: “We are very proud to be working with the Bournville Village Trust on a site of such significance to both the Trust and the local community.

“Working closely, we look forward to delivering a modern, fit-for-purpose development that will serve the needs of the community now and into the future.”

Bournville Park launched in July to huge demand, with works commencing on site at the same time. The first homes are set for completion this month (October), with BVT’s properties expected to be ready by March 2018.

According to the National Housing Federation*, the West Midlands has a five-year shortfall of over 45,000 homes. In Birmingham alone, the deficit of homes needed to meet demand stands at 18,000.

Bournville Village Trust is a housing association and charity founded by chocolate maker and philanthropist George Cadbury in 1900.