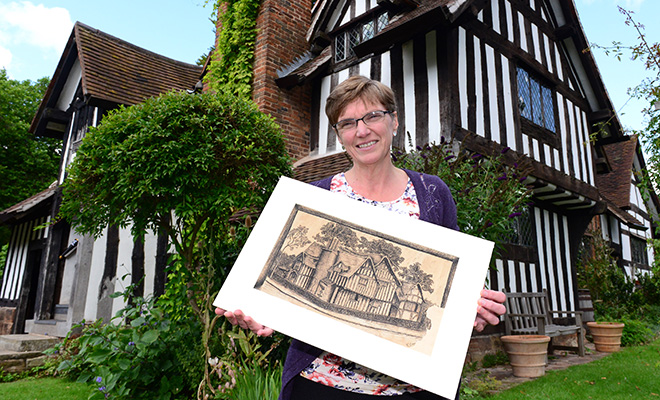 A sketch of a 16th century manor house by a veteran who survived the horrors of the First World War has been restored and donated to a Birmingham museum.

John Guest from Bournville was enlisted into the army in 1916 and sent to France to fight on the Somme. He was injured several times and mustard gassed, and consequently was awarded the Military Medal and twice Mentioned in Dispatches.

The former Cadbury factory worker was demobbed in 1919 and was so distraught by what he had seen and experienced during the War that he turned to art for solace.

Now one of John’s Indian ink sketches of Selly Manor Museum, a Tudor house dating back to 1476, has been donated to the museum by his daughter Daphne.

It has been fully restored by conservator Louise Vaile of Ogilvie Vaile Conservation and is available to view on request at Selly Manor Museum in Bournville as part of the museum’s archive.

Daniel Callicott, Manager of Selly Manor Museum, said: “We were so pleased to be contacted by Daphne about her father’s excellent drawing of Selly Manor.

“Not only is it an important piece to add to our archive, but it tells a story of the impact the First World War had on so many men and the way that they coped with the horrors that they witnessed.”

Daphne Guest, John’s daughter, said: “The drawing came about when my father came back from the Somme. He was so distraught and overwhelmed by what he had witnessed that he sought solace in sketching in his spare time as a form of early day therapy I suppose. Like all other soldiers he would never talk about the War.

“The sketches are very detailed and as I myself am now 80 years old, I wanted to make plans to get them into places where they can be appreciated. I am so pleased that Selly Manor Museum has been able to restore my father’s sketch and that it will now be enjoyed and appreciated by those who come to visit the museum’s archives.”

John Guest lived all his life in Bournville and worked at Cadbury for 51 years. He was married to wife Dolly in 1924 and they were one of the first couples to choose a house on the then new Bournville estate.

He also drew pictures of the Bournville Quaker Friends Meeting House and of the Somme, which have been shared with the Imperial War Museum.

Selly Manor Museum is one of Birmingham’s most historic visitor attractions and welcomes thousands of people, including school children, every year.

Made up of two distinct buildings, it brings Tudor history to life with interactive exhibits, tours, talks and special events.

The museum was opened by George Cadbury, who founded Bournville, after he rescued it from destruction and much of its beautiful collection was donated by the chocolate-maker’s son Laurence. It is managed by Bournville Village Trust.

To find out more about the Museum, please visit www.sellymanormuseum.org.uk