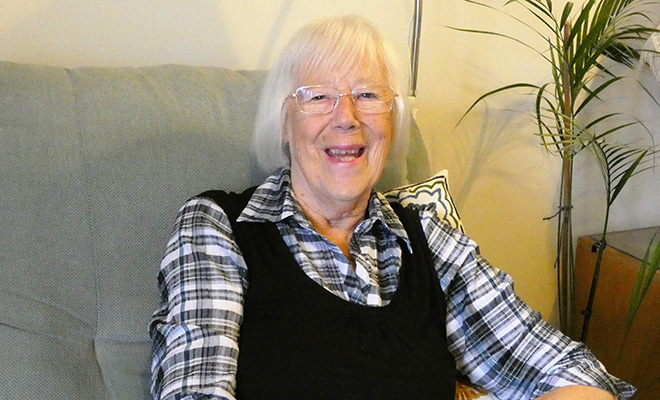 “I’m Brenda and have lived at Christopher Taylor Court (CTC) in Bournville for 11 years.

I love being a Bournville tenant as I have no worries about repairs or upkeep. CTC is beautiful and has everything I need, I never feel lonely as there is always someone to talk to.

I have three children, all boys, and seven grandchildren.  Two of my lads have served in the army. I have lived in many places before settling in Bournville, including Germany.  I say I was a bag lady because I was always moving around.

I love to keep active and have always worked.  For many years I was in accounts, but have also been a barmaid and before I officially retired I was a child-minder.

After retirement I got bored very quickly and just had to find something to do.  So totally unplanned, for nearly twenty years, I ended up working as a paid manager for Royal Women’s Voluntary Service at the old Queen Elizabeth Hospital, then Selly Oak Rehabilitation Centre and the Queen Elizabeth Psychiatric Hospital.

I finished as a volunteer for the WRVS in the café at the Women’s Hospital.

My eldest son moved out to New Zealand and while I miss him and the children, I keep in touch through Skype on my trusty iPad.

I enjoy the theatre, cinema, lunches and visiting friends and family.

I absolutely love the actor Jason Statham, from films such as Fast & the Furious. I have a life sized cardboard cut-out of him in my living room.  If I leave it by the window my neighbours think I have a toy boy!”


Categorised in: See the Person Campaign